Ragnarok: The Hammer - New Trilogy Based on Norse Prophecies Lures Readers Into Tales of the Ragnarok Apocalypse

Recent pop culture trends have spotlighted the huge popularity of bringing old myths to a twenty-first century audience. Opening a new chapter of the literary world, author Brian James announces a compelling new trilogy based on the Viking Apocalypse story of Ragnarok.

Detroit, MI -- (SBWIRE) -- 02/08/2013 -- The fascination with fantasy and myth that permeates the culture continues to grow. This allure crosses all demographic lines and can be seen in every entertainment medium. At the movies the Mighty Thor swings his hammer into a group of shell-shocked invaders from another dimension and the film becomes the highest grossing movie of the year. Seven of 2012’s top ten blockbusters involved mythical gods, superheroes, hobbits, or were steeped in magic and fantasy. This trend continued at the bookstand with novels about post-apocalyptic worlds or the influence of ancient gods on modern society being purchased by the thousands.

From books and comics to multi-million dollar movies, audiences demand more opportunities to engross themselves in something new. Meeting this demand, author Brian James announces a new trilogy that fuses Norse prophecies with the Ragnarok Apocalypse.

The series’ first book, ‘Ragnarok: The Hammer’, takes readers on a mythical journey alongside factions of Viking Gods fighting for control of the legendary hammer of Thor. This book weaves ancient myth and magic with science and fantasy to create a truly compelling and entertaining story that serves as a dramatic opening salvo to the Ragnarok series.

The Viking gods have been banished from Asgard by Odin. Today they make the best of life on Earth. Thor has denied his divinity and become an atheist. He still demands worship and finds life as a professional athlete gives him all the adulation he desires without the responsibility of godhood. Freya, the goddess of love, has turned to prostitution as a means of maintaining the lifestyle she has become accustomed to, and Loki sells cheap products on QVC.

Lurking in the background of their lives is a prophecy; one that declares that their time is at an end. Ragnarok is about to throw the gods into a state of civil war and the one who controls the hammer of Thor may be able to change the arc of destiny.

As the author explains, his book’s release comes at a time when legend and myth is as popular as ever.

“This story fits nicely into the current pop-culture trends. We are in a place where popular television shows are based on comic books, myths, and fairy tales. The highest grossing films have superheroes and demigods in them. In the literary world, authors like Rick Riordin have shown that when they bring old myths into the present there is a waiting and eager audience,” says James.

He continues, “This story is the first book in a three book series that takes on the Ragnarok Apocalypse that old Norse prophecies declared would be the end of the world. It is a unique story that will appeal to a large segment of the reading audience.”

With critics expecting the book’s popularity to increase, interested readers are urged to purchase their copy as soon as possible.

‘Ragnarok: The Hammer’, published by PublishAmerica, is available now: http://amzn.to/URLAQU

About the Author: Brian James
Brian is a professional writer whose work has appeared in the Detroit Free Press, World Poker Tour magazine, Classic Rock magazine, and a score of online publications. He has devoted two decades of study to Norse history and mythology. 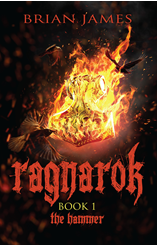