Screenwriter releases her newest supernatural thriller that has been described as the most chilling supernatural novel of 2015. The book is available from Amazon as a paperback and a Kindle download.

San Diego, CA -- (SBWIRE) -- 09/17/2015 -- San Diego screenwriter, Ramona Frye, has released her newest work, a supernatural drama called "The Awakening of Myra Thomas". The book is currently available on the Amazon as a paperback and Kindle download.

The story is a longer version of the screenplay of the same name. The thriller tells the tales of a spirit lost in time. Readers are introduced to the main character, Myra, a Negro slave who undergoes tremendous hardship. She and her long-time love attempt a daring escape, only to be captured and lynched after a few days after running for freedom. Myra's visions of returning has mysteriously manifested in a way that she never could have imagined..

The story jumps to more than a century beyond Myra's sad demise to modern times where the reader finds that Myra's spirit has awakened in the body of Karen, a white business woman. Karen must deal with the brutal beatings, rapes, and emotional upheaval that Myra endured more than a century prior.

Author Ramona Frye weaves the painful history of slavery into a modern-day story of spiritual possession in The Awakening of Myra Thomas. It is a gripping supernatural thriller that will leave readers racing through pages as Karen frantically attempts to discover the force ripping her sanity apart.

When asked why people should read her new book, Ramona said: "This book is a good read because it is a fast-paced mind bending ride into the supernatural where two worlds collide. There is intense drama and heart-wrenching thrills that keep the reader powerfully engaged from start to finish."

The new offering by Ramona has received positive reviews from book reviewers, and now it is available on Amazon to a wider audience.

About Ramona Frye
Ramona Frye is a member of SanDiegoFilm.net and the San Diego Film Consortium. She has written several articles for BraveHeartWomen.com, an online social media site for female-entrepreneurs. In addition to the novel version, she has also written a screenplay version of The Awakening of Myra Thomas. 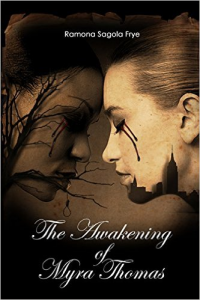