Tom-Oh released his debut album while studying at Arizona State University and has been made available on iTunes ahead of a major announcement about his forthcoming second album.

New York, NY -- (SBWIRE) -- 01/28/2014 -- Thanks to the advent of the internet more stars are being created at younger ages than ever as their talent speaks for itself. Rapper and now recording artist Tom-Oh has gone from strength to strength after a viral hit saw him work with DJ iLL WiLL, #1 Billboard charting artist Mac Miller and host of MTV2's Wild N Out, Traphik A.K.A. Timothy DeLaGhetto in 2011 and later opening for Chris Webby. He also worked with John Kilmer on his debut album #GoogleMe.

#GoogleMe features 12 tracks and is now available for download in full on iTunes. The move has prompted speculation about a second album release from the star, who has fuelled the fire by discussing plans to announce the title of a second album, due for a 2014 release date.

The artist plans to make the announcement via Twitter, and the release of his debut album on iTunes is sure to fire interest after over a year of enigmatic silence from the young star, hotly anticipated to become one of rap’s biggest names by music insiders. His current album already has a five star rating from users on iTunes and his viral single In The Morning has 144,000 views.

A spokesperson for Tom-Oh explained, “Tom-Oh took time out of the rap scene to sharpen his skills and pen his best album to date. He introduced himself with a mixtape, established himself with the debut album and is now creating something that is sure to help him break through within the mainstream music scene. The album announcement is coming soon so we advise everyone to get familiar with him now so that they can say they were there when he exploded like Macklemore. The announcement will be made by Twitter is sure to go viral, so following all Tom-Oh’s social media pages is a great way to be in on the exclusive.”

About Tom-Oh
Tom-Oh is an American recording artist and rapper from Long Island, NY. The success of viral single "In The Morning," mixtape Tell Your Friends and debut album #GoogleMe have led him to establish a career early in life, and will announce a second album later this year. For more information please visit: http://tom-oh.com/ 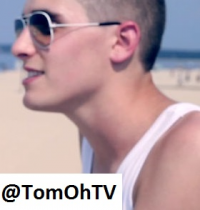