Westmont, IL -- (SBWIRE) -- 03/20/2017 -- Rasdale Stamp Company, one of the oldest family owned and operated stamp auction houses in the United States, recently completed the highest-priced sale of a single item in the company's 82 year history. The record-breaking item was an imperf sheet of 100 of the Canadian Bluenose, a particularly rare stamp that sold for $52,580, with a buyer's premium included. The sale was completed on February 19, 2017.

The Canadian Bluenose stamp is considered one of the rarest, most valuable and most sought after stamps, especially when it comes to the stamps and postal history of Canada. The Canadian Post Office released the stamp, which carried an original value of 50 cents, in 1929. The stamp derives its nickname from the image depicted on its cover: a fishing boat called the Bluenose. On the stamp, two different images of the schooner Bluenose are shown racing in Halifax Harbour, a harbour on the Atlantic coast of Nova Scotia. Some collectors refer to the Canadian Bluenose as "Canada's Finest Stamp."

A single Canadian Bluenose may be valued around $700; a complete imperf sheet of 100 of these stamps, as sold by Rasdale in their record-breaking sale, is much more rare, valuable and sought after than an individual example of the stamp.

Prior to its recent February sale from Rasdale, the imperf sheet of the Canadian Bluenose that sold for over $50,000 was last sold in 1970. Rasdale opened bidding for the item, which was Lot #1287 at its most recent public auction, at $13,000 and set the bid increments at $500. A bidder immediately upped the bid amount to $20,000, followed shortly thereafter by an increase to $30,000. Another few seconds went by before the bidding was increased by another $10,000 up to $40,000. At that point, the rapid, significant increases slowed and settled to around $500-$1,000 with each new bid.

Details and images of this rare sheet can be found at http://www.rasdalestamps.com/auction_browse.asp?auction=431&majgroup=SINGLES+or+SETS&mingroup=Canada&startlot=1241&searchtext=&group=20&pagenum=3

About Rasdale Stamp Company
Rasdale Stamp Company, a family owned and operated Chicago area auction house since 1932, holds several public auctions throughout each year on an approximately quarterly basis. Their recent February auction was the stamp company's first of 2017. Their next auction will be held on May 20-21, and other 2017 auctions are scheduled for late August and late November.

Full results of their recent auction are listed online. Details and deadlines relevant to the process of selling a stamp collection through Rasdale Stamp company can be found at http://www.rasdalestamps.com/sell.asp. 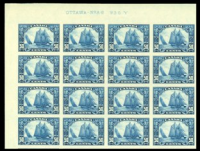