Andhra Pradesh, India -- (SBWIRE) -- 03/04/2013 -- India was in search of a youth leader who can carry forward the baton established by their predecessors and the search came to an end, at east for the time being. Sri Ravi Kumar Yadav, Youth Congress General secretary from Andhrapradesh established another milestone while assisting the Hyderabad twin bomb blast victims whole-heartedly. Both the leader and another members in the group worked selflessly to aid the blast victims while leaving a message for today’s youth society regarding their approach and duty towards the country.

The team that included other political personalities from the party arranged a small carriage and visited most of the blast-affected areas.  Under Sri Ravi Yadav’s  instruction, the team provided medical, food and different other aids to the victims.  However, whether they have arranged everything personally or have been supported by the party, is not been mentioned anywhere. It was an age-old theory followed by different political personalities to use this platform for social recognition, but Ravi tends to be an exceptional pioneer. Latest approach by the young leader once again proved this fact.

The leader has learned his duties and responsibilities towards society from his father Mr. Maraboina Bikashpati Yadav who is a renowned personality from Serilingampally Assembly Constituency in the state of Andhrapradesh. Sri Ravi Kumar Yadav is further popular for his mentality and willingness to help people in and out of the constituency in time of distress.

The young leader and his group member talked to the blast victims personally to know about their condition in detail. Their purpose was to present clear picture of such a heinous incident to the authority so that they can take necessary measures easily.

After visiting the hospitals where the injured victims were admitted, Mr. Yadav commented, “We were upset to consider the situation of the families and members who have been affected by the blast.  We pray hope and peace for all of them who are no more with us.”

Their next agenda was to organize rally in protest of such activities. The team organized rally in three different places like Kondapur, Kukatpally and Miyapur.  Rally was organized under party congress banner. People from different wings of the society supported these young leaders and their approach.

One of the members from the team commented that they been inspired by another youth leader –Rahul Gandhi and decided to go down to earth to be one with common people. Now, it is to see what upcoming leaders learn from this incident and how they proceed to maintain prosperity and peace. 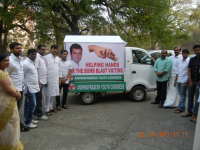 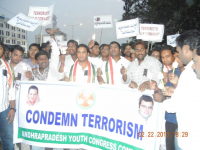