Sandy, UT -- (SBWIRE) -- 01/09/2013 -- RSL ubber goalkeeper Nick Rimando has won the 2012 MLS Save of the Year.  En route to the well-deserved award, he beat Vancouver goalkeeper Joe Cannon and even himself — twice.  Rimando's award-winning save — a reflex save against Sporting KC's Kei Kamara — marks the end of a quality season for the goalkeeper.  Despite holding three of the four final contenders and generally impressing through the year, he didn't even hit fourth in goalkeeper of the year tallies.  Some will dispute Nick Rimando’s win, pointing to Rimando's diminutive stature as the cause of such spectacular saves, but it's worth remembering that his height (or, if you will, ability to jump) wasn't involved in the save of the year — it was pure reflex and an understanding of where his body is at all times.

It is also worth considering that Rimando makes spectacular saves match-in, match-out, but it's certainly not because he's short that they are spectacular. It's more that he has a finely tuned ability to be in the right positions at the right times, giving him a leg-up on some of his lankier competition who might rely on their physical stature with more regularity. It's also worth considering that Rimando is fantastic on set pieces, rarely allowing opposing players much joy in the box. His lack of shakiness has been much to RSL's benefit.

NY: Acquired via trade from RSL on 2/9/07 for future considerations

RSL: Acquired via trade along with MF Freddy Adu from DC for GK Jay Nolly, a major player allocation and future considerations on 12/11/06 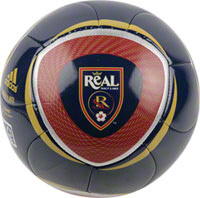