Cookbook Of Picky Eaters Recipes "What to Cook for a Picky Eater" Will Be Available For Free Download On Amazon March 21-25, Includes Recipes Awarded "Stick A Fork In It" Food App Editor's Choice Award

Charleston, SC -- (SBWIRE) -- 03/20/2013 -- Parents who have picky eaters are getting help from a cookbook of recipes from top chef John Newsome and his wife, Anne Newsome. The recipes in their cookbook, "What to Cook for Dinner for Picky Eaters" contains 23 delicious main dish recipes. Some of the recipes in the cookbook take a new turn on common kid's dinner time meals, such as a macaroni and cheese recipe with an ingredient few have thought of trying. The cookbook has a few sophisticated recipes for pasta that were created by Chef John Newsome and were given the thumbs up by the Newsomes own in-house picky eaters. This cookbook of recipes will give readers a variety of meats and flavor combinations to try with their own children.

The Crock-Pot Hamburger Soup recipe in the "What to Cook for Dinner for Picky Eaters" cookbook recently won the "Stick A Fork In It" food app Editor's Choice Award.

The Newsomes' desire to create a cookbook of recipes for picky eaters stems from their experience with their son, who came into their lives malnourished from an overseas orphanage. Anne Newsome describes the urgent struggle the family faced when their son first came home, and how that came to inspire the recipes in their cookbook. "We had to act quickly to help improve his health and development that had fallen behind as we waited for travel approval! After coming home at 14 months, unable to walk and barely starting to crawl, our son took his first steps within six months.

"While our situation was extreme and uncommon, we learned a lot along the way about dealing with picky eater behaviors. And having a parent with professional culinary training in the home has also helped us to develop recipes for our cookbook with flavor combinations that our children enjoy eating."

A video of their son's progress can be seen on their blog The Saturday Evening Pot.

Having overcome a picky eater themselves, the Newsome's knew that other families were dealing with some of the exact same mealtime battles. They decided to create a cookbook of recipes that included:

The Newsome's cookbook of recipes "What to Cook for Dinner for Picky Eaters" will be available for free download in Amazon's Kindle Store from March 21st thru 25th. 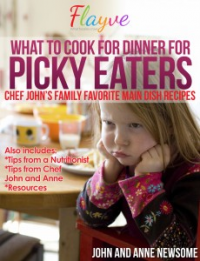