Psychological Antidotes and Soul Prescriptions: The Story of Darksoul Theatre™ is a look at a unique virtual theatre that’s in its 20th year. The intention of this art form is to create works of psychological significance and spiritual strength. Tank started the art of Darksoul at the tender age of 13 and has since performed at universities, festivals, and solo shows in the the Bay Area; Vancouver, British Columbia; Hollywood, CA; Tokyo, Japan; and in the first ever streamed performance at the Edinburgh Fringe Festival. His shows, “Magician’s Key,” “Cure for a Broken Heart,” “Soul Photography,” “For The Special Ones,” “The Power of Rejection,” and “Psychological Antidotes” all share one factor—the wish to help people face their inner fears and find personal strength.

The film will be screened on Saturday, June 15th at 5:30pm at The Actors Company in West Hollywood (no late seating).

Tickets go on sale on May 1st via http://www.hollywoodfringe.org 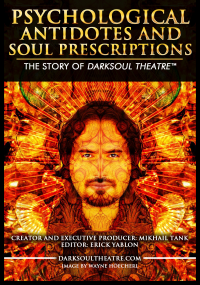