‘The Velvet Marigold Couch: My Private Waltz Into Madness’ may read like a twisted movie, but every dark corner and sick, maddening experience has been a reality for author Tasha Pedersen. The volume transcends a typical memoir about mental illness to throw readers where most sufferers wouldn’t dare – directly into the miserable and suffering mind of someone who has lost all sense of reality and control. From trying to cut off her own hand and kill her father to losing weeks’ of memory to alcohol addiction, Pedersen exposes all in the hope it will help others facing their own demons.

Boulder, CO -- (SBWIRE) -- 12/04/2014 -- There was a time when the thought of Tasha Pedersen ever writing a book was absurd; she couldn't even use a pen and the mental illness riddling her existence was more likely to kill someone or see Pedersen turn a weapon back on herself. But, overcoming impossible odds, Pedersen is still alive and sharing her story of bipolar disorder and addiction in what could be the most honest and gritty memoir ever written.
'The Velvet Marigold Couch: My Private Waltz Into Madness' pulls no punches when exposing the twisted life millions live. By taking her story public, Pedersen hopes to not only paint a portrait of the true horrors of mental illness, but offer a hand of hope for those who see no light in their own lives. This book isn't for the faint of heart – but a story humanity has to hear.

The Velvet Marigold Couch is a chilling look into the hellish torture of bipolar psychosis and alcohol and drug addiction. When Tasha Pedersen was six years old she watched as the walls of her safe suburban bedroom were engulfed in flames. Running down the hall, followed by the heat of the raging fire, she burst into her parents' bedroom screaming. By the time her father picked her up and comforted her, the fire was gone. As real as it was to her, it had actually only existed in her mind. Growing up in the shadow of an abusive and alcoholic older sister, Tasha takes her first drink at age 15 and quickly gets lost in a life of vodka, pot, cocaine, LSD and non-stop addiction. As she spins further out of control, she begins to hear voices, hallucinate and have delusions. Everything continues to spiral into chaos until she completely loses all sense of reality. The voices convince her that she must kill her father and tell her that the only way to save the world is by cutting off her own hand.

Thankfully she is hospitalized before she can harm anyone else or herself. She then begins the long and rocky path towards wholeness. With a diagnosis of Bipolar I, she bravely recovers from both her mental illness and alcoholism and winds up finding deep faith in Native American ceremonies that completely turn her life around. The Velvet Marigold Couch: My Private Waltz Into Madness, is a story of the true horror of bipolar disorder, the destructive power of addiction and the strength and courage it takes to heal from them both. It ultimately shows how anyone can triumph over severe adversity and come out spirited and whole.

"In short, I set out to put people inside my mind, so they can experience my sickness and suffering first-hand. There's plenty of mental illness memoirs out there, but most authors have not been to the depths of insanity that I have. That is because most people that have been as insane as I have been are either dead, locked up or on the street. None of the other bipolar memoirs on the market come close to exposing the hellish and horrifying torturous psychosis that I have been through and write about in my book. I'm putting it all out there, no-holds-barred," explains Pedersen.

Continuing, "But it's far from just a story about pain and destruction. It provides life-changing hope to anyone suffering from mental illness, abuse or addiction. Readers will see me overcome the impossible and wind up with joy in my heart. They can do the same. Families of the 'crazy' and even people with no ability to relate to mental illness will develop a better understanding of the struggles people face after reading my chilling account."

Readers agree, leaving a slew of positive reviews. Sunya comments, "…is a must read for anyone suffering from bipolar disorder, alcoholism, or a dual diagnosis of the combination of these two mental health issues. The book is uplifting and gives hope to those who suffer from either or both diagnosis. Ms Pedersen's writing is evocative and heartfelt."

Marc Swanson adds, "An eloquent exploration of the mind's outer reaches, this book is as much a memoir as it is a gripping page turner that follows the violent turns of mental illness and its delusions with equal measures of grit and poignancy. It is a fascinating glimpse into the inner spaces of a condition that is not often portrayed with such depth and humanity."

David Keane calls on all mental health professionals to purchase a copy, writing, "As an avid reader, I quite enjoyed this well written and engaging memoir. As a psychotherapist, I very much appreciated the insightful and informative self-disclosure of bipolar disorder and alcoholism. This book is a must read for anyone in the mental health profession."

'The Velvet Marigold Couch: My Private Waltz Into Madness' is available now:
http://amzn.to/1AfZ9Ms

About Tasha Pedersen
Tasha Pedersen graduated college with a degree in biology in hopes of helping those who suffer from mental illness. However, she soon realized she could help even more people by telling her story. Thus was The Velvet Marigold Couch born. Today Tasha mentors people with addiction problems and mental illness and lives with her faithful, loving companion, her dog Lulu, in her hometown of Boulder, Colorado. 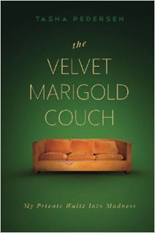