New Christmas Book for Boys Available on Amazon; Three Rotten Boys Scheme to Capture Santa and Seize All His Gifts

Los Angeles, CA -- (SBWIRE) -- 12/19/2014 -- The Santa Claus Down! book by author C.J. Walworth, is an action adventure misadventure Christmastime book about three boys who conspire to capture Santa Claus and grab all the toys and gifts. The book, which is available in Print and for E-readers is available Amazon and at fine book retailers nationwide, is appropriately sub-titled How three rotten boys captured Santa Claus and almost ruined Christmas. The ISBN is 1503293262.

To augment this humor, nearly seventy illustrations are included within the Santa Claus Down! book.

The main characters feel betrayed by Santa because for the past couple of years he has given the boys lousy Christmas gifts and few of them. The think that Santa is cheating them. His school mates and peers all get more and better stuff. The boys jealous rage builds and builds until the diabolical plan to seize Santa is hatched.

But grabbing Santa on Christmas night is not so easy.

Humorous trials and tribulations, pranks and pratfalls pop up as the Christmas clock ticks down. Neighbors, Postal workers, Cops, Repairmen come out of the wood works to cause problems for the boys as Christmas continues to inch closer and closer. Even Chris' dog causes problems; The chapter "Tiger's little problem" forced out-loud laughing and a tear or two. Chris' friend Billie likes to spice thing up with outlandish over-the-top fabrications, which leads to repeated run-ins with the law and the neighbors.

In the end, the boys learn the true meaning of Christmas, but not without an action-packed fight between Chris and his two pals vs. a whole army of Santa's miniature elf commando's.

Santa Claus Down! is an original Children's Action/Adventure/misadventure story which is specifically targeted to young boys. It is filled with nearly 30,000 words and original artwork. Mr. Walworth's previous works have been cited as helpful to transition reluctant readers into eager readers. Certain science principles are expertly woven into the story: the reader doesn't know he is learning about how cell phones work and about radio frequencies and propagation, etc.

The author is available for interview. 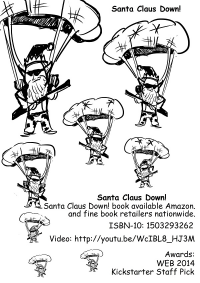