AiFI, The First Intelligent Modular Sound System in the World

Karlstad, Sweden -- (SBWIRE) -- 12/25/2014 -- A Swedish team is introducing the first Artificial Intelligence Fidelity (aiFi) the first truly intelligent modular sound system which can be built with several units just like lego and they've launched an IndieGoGo to produce and distribute it.

When they are shipped, the Speaker units packages will contain: The number of aiFi units of the perk chosen (1, 2, or 6), an adapter cable that has a 3.5mm plug to 2x RCA female adapter, a case that is protective and soft that fits the aiFi and the included power adapter plus cables, and the power adapter which is a power supply with exchangeable plugs for either US, Europe, or the UK.

The team understands that having a gift for under the tree is not possible due to time, however, they have created a beautiful gift card, ready for print out to deliver to the person receiving an aiFi for the holidays.

And the special referral program is on now. From now on anyone who refers five (5) friends and family members to the campaign who actually purchase an aiFi perk, then that person receives an aiFi for FREE. The aiFi uses Bluetooth technology and is able to utilize any music file or streaming service. This is the gift that keeps on giving.

Angel investors helping fund the aiFi – Smart Stackable Sound campaign to the next level will be eligible for perks such as thank yous, one stack Aluminum Edition speakers, Two Stack Edition Speakers, Six Stack Package and a Titanium Package.

The team also understands not everyone may be able to give money to help the aiFi – Smart Stackable Sound campaign, so they ask that those who cannot give monetarily help by spreading the word about the aiFi – Smart Stackable Sound project online through social media such as Facebook, Twitter and Tumblr or record a video challenge for Vine, Facebook or Instagram to invite friends to give to or share this IndieGoGo fundraiser. Include #AiFiSound in all posts. 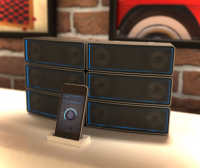