Boosting the Party with Creativity and Wit: Enhancing the 'Feel' of Captured Photos with DIY Photo Booths

The idea of having a photo booth can be rooted from the modern concept by Anatol Josepho of the photo booth, which developed and printed 8 photos in strip for 25 cents in a matter of ten minutes in the process.

Markham, ON -- (SBWIRE) -- 01/05/2015 -- The craze of having photo booths to liven up an occasion has caught the interest of many not to miss it on must-have list when setting up a party. That instead of renting a conventional photo booth or hire a company to do the photo booth services, people can now DIY their photo booths using the very gadgets owned. With just a few clicks and some customize photo strips, props and backdrops, it's good to go.

The idea of having a photo booth can be rooted from the modern concept by Anatol Josepho of the photo booth, which developed and printed 8 photos in strip for 25 cents in a matter of ten minutes in the process. It was widely used by many for its convenience ever since it was erected. A lot of photo booth variations, including photo stickers, have become dominantly in-demand that some have found a way to use it to do a wedding proposal.

According to a photo booth Toronto rental, this modern kiosk that contains a camera and film processor is one of the best photo services in capturing memories and in creating more meaningful party favors. Photo booths are not the typical picture taking with a person standing behind the camera. It is automated. When a person presses the button, the fun, candid, awkward moment was captured and was printed to three or four pictures in vertical strips.

People can be creative with their own photos using several props and backdrops to give personality in each picture taken. And nothing seems complicated in DIY-ing a photo booth if the right equipments and props come in hand to give life to the party. To DIY a photo booth here are some things to grab, to make the first attempt a success;

Devices in taking the photos: A lot of photo booth application can now be downloaded whatever devices make it an Apple iPad or an Android, will be used in taking the photos. Just keep in mind that the app will allow the user to customize the photo layout, print automatically and/or upload the pictures to social media sites (Facebook, Flickr, and Instagram)

Backdrops to set the mood: From a rainbow colored ribbons, chalkboard backdrops, neon colored balloons or shining and shimmering backdrops, it's up to the party planner how the backdrop can help enhance the mood with the backdrops placed on the photo booths as long as it complements the 'feel' of the occasion.

Props to add quirkiness: Photo props should not be forgotten for these are essential addition to set the tone of the pictures. It gives people something to do while their photos were taken. It is easy to customize and make using a printer, tape, wooden dowels or party straws. Other DIY websites offer downloadable photo props.

Photo booth Signage to lead the way: Signage can help make the DIY photo booth looks legit and increase excitement to many people who loves their photos taken in photo booths.

Pictures are certainly worth a thousand words especially if a lot of people will be able to add personal touches to the photo booths with DIY props and backdrops on hand. It's just a matter of creativity and right use of resources to make every single effort worth it.

About Focus
Focus is a family business that started in 2009. They practice and easy going and non-invasive style, however this does not mean they putting the quality of their services and products at risk, they just understand that some of their client may be uncomfortable with cameras. Through the years, the family grew and so is their production studio. Presently, Focus houses more than 20 talented Toronto wedding photographers and videographers catering to all Toronto weddings and the occasional destination weddings. 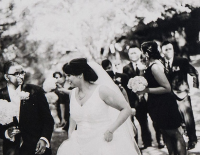