Masterfully crafted by Frank Drury, ‘Random Shootings’ tells the chilling yet all-to-real story of a ‘normal’ young boy whose growing fascination with guns turns him into a monster. While a work of fiction, Drury spins in plenty of fact to paint an accurate and chilling picture on both sides of the gun control debate. Critics have already hailed the book “...an easy read that puts a troublesome issue in the spotlight”.

Jacksonville, FL -- (SBWIRE) -- 01/23/2015 -- If 2015 is anything like its predecessor, almost nine thousand Americans will fall victim to gun-related homicides before the end of the year, compared to just two hundred in neighboring Canada. Millions of Americans agree that something needs to be done to tighten gun control and educate the public, while just as many on the other side of the trigger spit venom at any attempt to quash their Second Amendment rights.

In his compelling new novel, 'Random Shootings', Frank Drury takes readers into the dark side of the gun world; perfectly capturing and examining how someone can turn from the perfect kid into a deeply troubled adult. The story is a microcosm of the entire debate playing out across the nation, using its non-judgmental narrative to help readers decide how they really feel about a subject that will leave twenty-four people dead today.

This new novel introduces John Watson, a crime reporter, and his wife, Diana. The story shows how they deal with never-ending episodes of gun violence in their personal lives. Unable to have their own children, they adopt a nine year old boy and a nine year old girl. Their daughter, Trish, loves playing soccer and does very well in school. Their son, Brian, is bullied in middle school and grows up to become a disturbed young man with an uncommon fondness for guns. From mall shootings, school shootings, even military base shootings, this important new book offers a reflection on gun violence in America today and shows the impact it can have on a family.

"I wrote this story to be very real; to fuse together a cocktail of fact and fiction that represents an issue plaguing society at this very moment," explains Drury. "It may not be an easy read, but kids like Brian are hitting the headlines every day. But it's vital not to dish out blame. Rather, the narrative takes a careful and measured look at the root cause. Are murderers born into their personality? Did their behavior develop at home or is wider society to blame? That's my goal with this book, and I'll leave readers to draw their own conclusions."

Since its release, the book has garnered a string of rave reviews. Indie Book Reviews comments, "It's rare that a book can so poignantly capture the whole landscape of the issue at hand, and also put it into context with the emotional ramifications and consequences."

Readers Favorite adds, "Random Shootings is chilling and feels all too real when you consider the number of deaths due to guns that occur each day. Drury's thoughtful and well-written work infuses real life to those statistics."

Shelfari praised Drury's ability to remain neutral, writing, "The author wasn't preachy or judgmental about the issue, but showed both sides. His writing style flows nicely and is easy to get lost in."

It may also be ordered through Apple or your local bookstore!

About Frank Drury
Frank Drury spent the early years of his career as a struggling screenwriter in Los Angeles before moving to New York, where he found some success in the high risk world of futures trading. This is where he gained the inspiration for his first novel, AN EMPTY SKY, which is available in paperback, or as an eBook, through Amazon.com or BarnesandNoble.com. His second novel, A DREAM AWAY, is currently available in paperback or as an eBook. His third novel, COLORED FLOODLIGHTS, was released in May of 2012 and received a 4-star review from Readers Favorite who called it "A recommended read for the thoughtful!" Midwest Book Review says "Colored Floodlights explores the mind of the veteran and the lost generation, a read well worth considering for those seeking contemporary literary fiction." His latest novel, RANDOM SHOOTINGS, is now available on Kindle and in print. Reviewers say it is "Chilling" and "Compelling". He lives in Jacksonville, Florida with his wife and daughters, where he continues to write fiction. 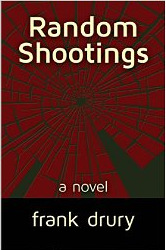