Ken Bumpus’ ‘Those Crazy Camera Guys: Navy combat photographers in Vietnam’ bucks the trend of media reports depicting the Vietnam War as nothing but atrocities, by showcasing the people behind the conflict and the caring humanity they extended to the war-town country they were sent to fight in. But this story is told from a wholly-unique perspective; through the lives and lenses of a Combat Camera team tasked with documenting Navy, Marine, SEALs, and other Navy-related units in Vietnam. Bumpus was once one of them, now fusing fact and fiction into a story readers won’t forget any time soon.

Longwood, FL -- (SBWIRE) -- 01/23/2015 -- While the Vietnam War negatively changed the lives of tens of thousands of Americans that served through it, the media seemingly forgot to report the acts of sheer humanity and kindness troops extended to the people whose lives they had upturned. Many of these incidents were captured by Combat Camera teams; servicemen with the bold task of documenting the work of Navy, Marine and SEAL personnel.

Ken Bumpus was one of these camera-wielding heroes, now turning his experiences in Vietnam into a compelling work of fiction. 'Those Crazy Camera Guys: Navy combat photographers in Vietnam' shows the human side of war from an unbiased angle. The camera never lies…

Those Crazy Camera Guys is a fictional depiction of one five-man Combat Camera Team's Vietnam adventures. The team is unique in that it is mobile and travels throughout the Asiatic Theatre searching out the stories of the US fighting men.

The horrors of combat lead the team to take on a devil-may-care attitude during their off-duty time, which results in the men they encounter declaring that the 'CCG' designator of the command they serve under "does not stand for 'Combat Camera Group' but should translate to "CRAZY CAMERA GUYS".

"It was a pretty insane world for all in Vietnam, so many turned to humor as their closest and most called-upon weapon," explains the author, who served three tours during the conflict. "These men also had a very human and compassionate side that the media didn't report at the time, and the point of my book is to capture it."

Continuing, "They put in place many people-to-people caring programs designed to help the innocent Vietnamese. For example, Navy medics travelled to jungle villages to set up clinics to treat the villagers for everything from tooth-aches to boils on an elderly man's posterior and distributed US AID food and clothing to young and old. The SeaBees repaired power-plants, rebuilt bridges and constructed hospitals. This was all brushed under the rug at the time, but my unit captured it daily."

Alexander Sloan commented, "I enjoyed reading a novel about something I actually lived. All in all, it was an enjoyable read about the Vietnam era......"

About Ken Bumpus
After serving twenty-six years as a navy photographer, documenting Navy and Marine action in Korea (Inchon, Iwon, and Hungnam) and three tours in Vietnam, Ken Bumpus, PHCM, US Navy (ret), has drawn from his background to produce this novel, a fictional depiction of one Combat Camera Team's Vietnam adventures. Ken's photographs and stories have appeared in numerous US and foreign magazines and newspapers, such as: The old Washington Star Sunday Pictorial, The New York Herald Tribune (Paris Edition), The San Diego Dispatch, The Seattle Times Sunday Pictorial, The San Juan Star (Puerto Rico), Stars And Stripes (Far east and European editions), The Florida Bankers Magazine, And Woman's World. One of his photos of the invasion of Inchon, was used to illustrate a ROBERT RIPLEY BELIEVE IT, OR NOT item. In 1963, he was named one of the Navy's top ten documentary photographers and selected to attend a Navy-pioneered course of education in Photojournalism at Syracuse University. Following his '65, '66 and '67 tours in Vietnam, where he earned the Navy Combat Action Ribbon, Master Chief Bumpus was assigned to the Navy Advanced Photography School, in Pensacola, Florida as Phase Supervisor. His next duty was with the Combat Camera Group, Atlantic (Puerto Rican Detachment), as leading Chief. On being detached from CCGLant, he was awarded The Navy Achievement Medal for his work there. Ken's final duty station was at The United States Naval Academy as Staff Photojournalist, where he retired in 1973. At that time, The Superintendent of the academy presented Ken with a Letter of Commendation. Subsequent to his retiring, Ken worked twelve more years for the Navy as a Civil Service Photographer at the Orlando Recruit Training Command. Then, spent five years managing the Photo Department of the Seminole County (FL) Sheriff's Office. Ken is a Life Member of The National Press Photographer's Association, and National Association. 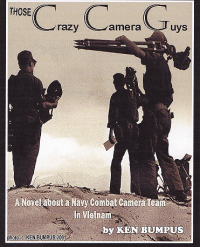