Masterfully crafted by Rachel Strong, ‘Katya of Damaszkuszi: Szeretlik Means I Love You’ fuses fact and fiction to tell the gripping story of a naïve young Hungarian girl contracted to marry a noble Mayor. With no choice but to fall in love with him, their coming-of-age takes a turn of grave danger as they fight to avoid paying a fatal price for their bonds. Strong’s narrative, based on the times of her own ancestors, gives a vital insight into the historical significance of inequality among women

Irmo, SC -- (SBWIRE) -- 01/23/2015 -- While she can now sit at her writing desk and create powerful fiction that the world wakes up to, Rachel Strong's European ancestors make her story of success somewhat unlikely. The world has come a long way in one hundred and fifty years, since Strong's family in Europe were forced to endure soul-destroying oppression and women existed with no role but to serve their husbands.

But throughout their plight, these European societal heroes still found love. After meticulously researching her family's history and being blown away by what she learned, Strong is transposing the story of one young heroine into a compelling new series of novels.

'Szeretlik Means I Love You' forms part one of 'Katya of Damaszkuszi' – a cocktail of gripping love and an exposé on European history's darker side.

Katya of Damaszkuszi, is a sixteen year old who lives a life of innocence until she is contracted to marry Charles, a nobleman and officer of the Austrian Hussars.

Summoned to Damaszkuszi for her formal engagement, the dark-haired innocent soon learns what desire and love entails as she falls in love with the lord of Damaszkuszi.

There is grave danger awaiting them just outside the walls of the castle called Damaszkuszi with both of them paying the price for their all-consuming love. Follow her as she finds love, heartbreaking loss and independence on the journey called life.

"This is the story of my ancestors; a microcosm of what happened to hundreds of thousands of families caught in the wrath of the Hapsburg Monarchy," explains Strong. "I wrote the book to help modern society understand the trials and tribulations of true love as they played out through Europe's most turbulent times."

Continuing, "But there's also an even darker undertone of inequality among women, something that still muddies the waters today. Women in Hungary, Austria and France throughout the mid-1800s were pawns to their male counterparts. By hearing about how they lived, it is my hope that we'll gain vital perspective on similar problems we still face today."

Since its release, the book has garnered a string of rave reviews. For example, Janet James comments, "Ms. Strong pulled me right into the matter of the book in an easy-to-understand way. The characters move physically throughout the setting revealing the characters' emotions and sexual arousal. Overall, Katya of Damaszkuszi, Szeretlik, is an excellent novel; one worth recommending to anyone who loves a good romantic novel – just have a box of tissue next to you when you read it."

About Rachel Strong
Rachel Strong was born and raised in Chicago, Illinois and presently lives in the Columbia, South Carolina area with her husband and pets. Rachel loves organic gardening, and when she is not writing in her office, she can be found in her garden trying to persuade her vegetables and flowers to grow faster. 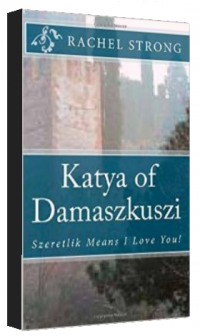