Julio Anta’s ‘Anta's Ageless Warrior Fitness’ fuses his remarkable personal story of health and success with a proven blueprint any over-forty can use to get fitter, look younger and remain healthier for longer than they ever thought possible. The author started life as a weak boy, changing his outlook on life after discovering secret methods to getting into bodybuilder shape and looking younger than just about any other fifty-seven year-old on the planet. By following his proven plan, anyone else can now do the same.

Miami, FL -- (SBWIRE) -- 01/26/2015 -- While it's now impossible to believe, Julio Anta was once a weak and sick young boy, too weedy to play with the tough guys and destined for a life as a pushover. However, those now crossing him are in for a surprise; he is three times as tough as them at fifty-seven years-old!

Approaching his forties, Anta was well aware he was losing muscle tone fast and was committed to a life of health, happiness and longevity by finally getting fit. Finding no books on fitness for those aged forty and over, Anta set out to develop his own methodology and launch his own business to share it with the world. 'Anta's Fitness and Self Defense' has since become a staple on the Florida fitness scene, pushing Anta into the national media spotlight and creating demand for a series of highly-acclaimed DVDs.

His debut book, 'Anta's Ageless Warrior Fitness', could be his most powerful resource yet. Aimed specifically at those aged forty and above, Anta weaves his own personal story of fitness in middle-age with a tried-and-tested blueprint anyone can use to foster the longevity they crave.

This book is Julio Anta's journey to being fit and looking young at 57. Learn how how Julio Anta went from being like Charlie Brown to Superman and how this grandfather has improved in his 50's. Julio Anta believes in leading by example. As you will see by his youthful looks and physique not only does he talks the talk but walks the walk. *Discover your Fountain of Youth *Age defying fitness, health and longevity *How to look, feel, and function 20 to 30 years younger *How to raise your testosterone and growth hormone levels for longevity *Discover the secretes to longevity and fitness of celebrities and athletes *Learn how local ageless warriors stay fit *Learn how to train around injuries *Healthy eating for longevity *Anti-Aging and longevity supplements.

"The problem is that most anti-aging advice is given by professionals in white coats who are anything but muscular and often suffering from the rapid loss of muscle tone they are trying to prevent," explains Anta. "My book will keep you slim while bulking up your muscle; a combination rarely seen in the middle age and senior markets."

Continuing, "My story proves that you can get into awesome physical shape at any age, and I provide a plan for doing so that I have spent two decades testing on thousands of clients. Other fitness plans for older adults are unproven and unpredictable, but this is the real deal. In fact. I've hand-picked a selection of my clients to contribute their experiences and prove that you really can bulk up and get super fit at any age. Who doesn't want to live longer?!"

Since its release, the book has garnered a string of rave reviews. For example, Eric Guttmann comments, "I have personally known Julio for a couple of years and can tell you that this man walks his talk. His big take-away from researching training for people over 50 was that if you train geriatric style you will feel like a geriatric case. However, if you train like an ageless warrior then you will feel, look, and perform as an ageless warrior regardless of your age. I am very happy to call Julio my friend and fellow on the path to ageless living."

For more information on the author's work, visit: http://www.MiamiKettlebell.com.

He is a member and certified instructor of the Jeet Kune Do Athletic Association. He also holds rank in Paul Vunak's Jeet Kune Do, DOM (Descendants of the Masters) as a certified Jeet Kune Do Instructor, Law Enforcement instructor and Edge Weapon instructor. He is a Hung Gar Kung Fu Master under the late Grand Master William J. Chung of New York. He was Grand Master Chung's personal representative in the South East United States. 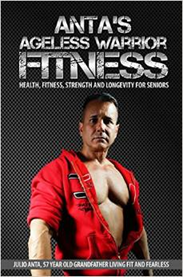