Comeuppance: New Book of Short Stories of Student Life in the 60s Depicts Shifting Moods of the Country

Masterfully crafted by Michael Ahn, ‘Comeuppance: Stories from the 1960s’ compiles eleven stories that present a unique and compelling commentary on one of the nation’s most pivotal decades. From a Senior trying to avoid the draft to a Sophomore selling paper dresses in order to buy a car – each line showcases and embraces a period in which societal moods underwent a radical shift. But, in what may appear to be a quirky juxtaposition, each story also perfectly encapsulates life in a present-day America that struggles to decide its identity.

Santa Barbara, CA -- (SBWIRE) -- 01/26/2015 -- While many remember (or don't remember!) the 1960s for its outward expression of peace, love and chance encounters with the unlikely, history now views this most fascinating decade as a turning point for America.

In a remarkable fusion of fact and fiction, author Michael Ahn has compiled the 1960s coming-of-age stories of eleven individuals into a compelling new book. 'Comeuppance: Stories from the 1960s' is a microcosm of the entire nation at that time, serving up both stark contrasts and shocking similarities with life in 2015.

In this collection of eleven diverse stories from the Sixties, Michael C. Ahn offers vignettes of a period when bowties gave way to long hair. Some stories are poignant, others haunting or riveting, but all evoke a decade of shifting mood in the country. A handful of these stories have previously appeared in literary reviews.

Comeuppance presents tales with gutsy suppleness: a roommate uses bizarre means to learn about women; a brilliant physics professor does not yield to a desperate student; a photographer imagines a clever way to seduce a beautiful coed; a sophomore sells paper dresses to buy a car; a student has flashbacks of a Vietnamese woman and a former teacher; a returning senior is caught between the hip and the conventional while trying to avoid the draft; and a Chinese Texan is invited to join a Jewish fraternity.

"Of course it's fiction," explains Ahn, who once worked with the Apollo space program. "But every story and vignette is a representation of something that took place or someone that lived through the 1960s. It could be your story, the story of your neighbor or your parents."

Since its release, the book has garnered a string of rave reviews. Kyle John Janison comments, "Each story is tightly written, and Mr. Ahn has a keen sense of pacing as well as humor, so you won't be bored. In addition, though seemingly spun as a bunch of coming of age and frat stories, each one delivers an underlying message about issues of that day – the shift in gender roles, racism and bigotry, and the abuse that authority can dangerously level – which still resonate all these years later. While Mr. Ahn's writing can be taken as a commentary on that difficult decade of American history, they are just as much about life today. Definitely pick up this book."

'Comeuppance: Stories from the 1960s', from Vineyard Books, is available now: http://amzn.to/1AT0K9p.

About Michael Ahn
After receiving degrees from Cornell, Michael Ahn worked on the Apollo space program before moving on to teach and consult for business and government. This is his first book of fiction. He lives in a small town in California. 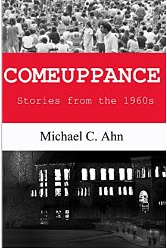