Victor Lopez’s ‘Victor’s Luck: A True Story of Loss, Hope and Redemption’ documents its young author’s life from his birth in a psychiatric hospital and abandonment by his family to his tumultuous foster care, imprisonment and eventual triumph as an esteemed young journalist. It’s not an easy read, but a shocking true story that touches on the societal epidemics plaguing the nation. Yet, with all of its dark undercurrents, Lopez’s wisdom also provides bold hope for those who feel the ‘system’ has forgotten them.

Greensboro, NC -- (SBWIRE) -- 01/27/2015 -- When Victor Lopez opened his eyes for the first time he was in a psychiatric hospital, staring a family in the face that would soon abandon him; forcing him to endure an early life under the control of a broken foster care and eventually prison system. Still just a young man, Lopez has since fought off his demons to become an authoritative journalist for outlets including The Huffington Post and will soon be starting Law School.

A blessing from above? No. Lopez's story is proof that even the most disinherited in society can succeed if they foster the will to grasp it. His gripping and insightful life story is about to be released as 'Victor's Luck: A True Story of Loss, Hope and Redemption,' which shines a spotlight on youth and LGBT homelessness, the school to prison pipeline and a foster care system that is flawed at its very core.

Victor's Luck takes the reader on a journey from living in a dirt pile of a childhood. His biological mother psychotic, his biological father a Cuban refugee who spoke no English. Victor lived in 40 foster homes, three group homes, suffered the loss of his adopted parents and rejection from his biological family from the time he was a fetus. As a young adult Victor found himself arrested for running away and bouncing checks. His biological family never offered him the resources he needed to get on his feet. While being held as a material witness by the Department of Justice, Victor's story went out on a syndicated talk show and many people wrote to uplift and support him.

One of the listeners, a medical doctor, took Victor into her small family. Once released Victor went on to college and made a positive splash along the way. He is now preparing to enter law school, is an avid writer and journalist. His work appears frequently on The Blog at The Huffington Post. Some of Victor's Luck has been fictionalized for purely legal reasons.

"Millions of kids are rejected from their families, foster care and the criminal justice system due to hate, yet maverick acts of altruism from complete strangers do step in to turn troubled children like me into adults that can excel," explains Lopez. "I see sharing my story as a duty to society; to call attention to vital issues but also showcase the miraculous life transformations that do take place."

Continuing, "Readers will have an opportunity to explore issues relating to family, dealing with PTSD, discrimination and homophobia. Having been through them all and come out the other side alive, I also pull no punches when showcasing the true realities of foster care, prison and families where discord is the norm. Hundreds of thousands of children are born, barely graduate from school and go straight into prison. That was me, but it doesn't have to be that way."

Lopez hopes his book will also uplift and give hope to those who cannot see the light in their own life.
"Despair is debilitating for any young person. But those willing to exercise patience, believe in miracles and take a huge leap of faith will be surprised by the U-turns life affords. I want these youngsters to know that life hasn't given up on them, and that they should never give up on themselves," he adds.

'Victor's Luck: A True Story of Loss, Hope and Redemption' is due for release in mid-March of 2015, and will be available in paperback, hardcover and eBook formats from all major retailers.

About Victor Lopez
Victor Lopez attended Guilford College in Greensboro, North Carolina where he earned his B.A. majoring in English writing. He will be entering Law School in the Fall of 2015.

Lopez was the 2008 winner of The Nation Magazine college writing contest with his piece titled "Transcending Trauma." Lopez was President of Guilford College's student government association and a senior staff writer for the Guilford College paper, The Guilfordian. He contributes to multiple publications and is a self-proclaimed nerd. 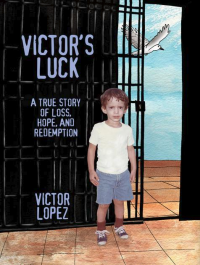