Sally and Other Stories: New Book of Short Stories for "Thinkers", from John Cook, Empowers Readers to Broaden Their Intellect & Expand Their Experience

Masterfully crafted by John Cook, ‘Sally and Other Stories’ contains six short stories, four vignettes and three free-verse poems, each deliberately constructed to tackle tough societal themes and evoke bold emotions in its readers. From sexual dysfunction and alcoholism to the threat of random murder and even the supernatural, Cook constructs beautiful literature that transcends a simple story.

Oak Hills, CA -- (SBWIRE) -- 01/26/2015 -- While most authors write to give their readers nothing but a quick thrill, John Cook's classical literary training instead compels him to move his readers, set their minds racing as they debate some of society's most controversial epidemics and ultimately broaden their life experience.

His latest book, 'Sally and Other Stories' achieves this with gusto. Comprised of six short stories, four vignettes and three free-verse poems, the volume is already empowering readers to dig to the core of their human personhood and embrace life from an uplifting new perspective.

This book was written for people who enjoy thinking. Though vicarious, the stories become real once read, entering into the reader's memory as experience. A good story well-read thus becomes an actual experience. Personal enrichment thusly follows.

Each story revolves around its central characters, complex people who are in deep conflict and are struggling, often heroically. The physical settings act as a frame for pertinent central points. By engaging with this material, the reader develops an increased inner strength.

Elements of these stories include sexual dysfunction, alcoholism, prostitution, panic, dislocation, the Supernatural, angst, frustration, despair, the war in Vietnam, the life of a young man growing up in a tough Depression Era town in Washington State, the killing of a town bully and his subsequent resurrection, and the struggles of a former guerilla fighter/spook/killer's relationship with his homosexual son.

These stories will broaden the intellect, increase the capacity for human emotion, and take the reader to places otherwise not encountered. The book has wings. Fly it and see where it takes you.

"I don't shy away from any unconventional topic," explains Cook, a graduate of the UCLA Graduate Program in Creative Writing. "Readers will dive deep into the Vietnam War, prostitution, the Great Depression and bold forces such as angst and panic. But there's a reason – to broaden their intellect and increase their capacity for emotion."

Continuing, "The book seeks to increase the sum total of good in the world. Great literature isn't just about writing a good story, it's about creating art; something that exists on a higher plane and has the ability to move audiences to wherever their imagination chooses to take them. That's my goal every time I put pen to paper."

Since its release, the book has garnered a string of rave reviews. For example, Adam Kijak comments, "John Cook's work is difficult to take lightly. His pinpoint accurate description of events allows for the feeling that one can join him on his journey. Cook's way of leaving emotions open to interpretation, while carefully leading you through his stories, makes it nearly impossible to lose interest or feel disconnected from the occurrences. As a fellow alcoholic and addict, I can say that the feeling of despair and confusion described is not a far stretch."

Brianna Morgan adds, "As I read through these stories, I found myself quickly, as well as unexpectedly, emotionally invested. I experienced a sort of anxiety at being unable to read them fast enough; I wanted to know what was going to happen and I wanted to know immediately. These stories allow you a brief glimpse into the catacombs of a drunk and wounded man's mind; a mind that might otherwise be perceived as numb and unresponsive instead of a labyrinth of vast feeling and emotion."

'Sally and Other Stories' is available now: http://amzn.to/1CYp8Jj

About John Cook
John Cook has been a Special Education instructor in the State Hospital System of California and the California Department of Corrections. Nominated for the Kirkwood Prize for "Granville Henry," he has completed the UCLA Graduate Program in Creative Writing "with Distinction." Sally is his debut collection of short stories. He shares his birthday with his favorite author, Ernest Hemingway, a fact that motivates him to write and keep writing. 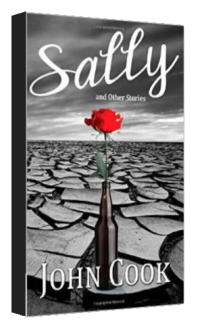