An Uncharted Desert Isle: Brain Injury Survivor Sets out to Save Country with Bold Memoir - His Plan? Curtail Spending on Seniors & Create Boundless Opportunities for Youth

Since 1971, Rick Fernandez has been living as a brain injury survivor; a unique vantage point he views as a gift rather than a detriment. But, having taken over $2M of public funds during the course of his rehabilitation, he is now urging the Government and society to put an end to this waste—or in reality, slow it down considerably. Fernandez is confident that brain injuries happen for a reason and, in his gripping and thought-provoking new autobiography, he discusses how curtailing spending on Seniors and diverting the funds to young people could not only reduce the number of brain injuries this country suffers, but save this nation as a whole. ‘An Uncharted Desert Isle’ makes insightful reading for all ages, especially the young or for those caring for fellow survivors.

Los Angeles, CA -- (SBWIRE) -- 01/26/2015 -- In 1971, when he was just eighteen years old, Rick Fernandez, driving a quirky three-wheeled car, bit off more than he could chew. However, this opened a new chapter in his life as the miraculous survivor of a massive brain injury. For a young man who spent a couple months in a coma and was told he would never walk, and probably shouldn't be alive, the successes he would experience, prove that all survivors have way more power than they, or others may think.

In the first of what will be five books, (in the first four, Fernandez, tells his gripping and illustrious life story—no punches pulled) Rick provides a bold message that could just save the nation.

'An Unchartered Desert Isle' tells of an unlikely enemy robbing the nation – namely Seniors who fund their own lives, while at the same time denying young people the opportunities they both need and crave.

"During my lifetime I have taken more than $2M of public money out of the system to fund my care and rehabilitation. This has to stop!" explains Fernandez, who has a long career working with the nation's Seniors and others who have suffered massive trauma. "The bottom line is that our youth are going down the tubes, all because they are underfunded and not afforded the opportunities they need to prosper. I radically suggest that we curtail funding for Seniors and get young people educated, and NOT encumber them with a debt their forefathers incurred. I want them to be supplied with the things and chances I had when I was their age."

Continuing, "Believe me – brain injuries are not an act of nature or God. They happen for a reason. 1.5 million young people this year alone will end up like me – forced to live a lifetime of never-ending rehabilitation due to a head or brain injury – but if we afford young people a new lease on life, we can quash this number almost down to zero." Just imagine the money that will be saved.

The author has four more books planned, primarily directed at young people looking to lead a happier and more successful life. In these four books, "street talk" abounds. This was probably the reason over 100 publishers refrained from putting me into print. However, now that I have proven I can write without the use of four letter words, I can hopefully see those put into print. If those four books were read and discussed in the last two years of high school, in special classes—similar to driver's training, however, this could more aptly be titled: Life Training, we could save a generation.

"Young people have more strength than they ultimately know, but right now, many feel as if they have nothing to live for. My future books definitively lay out a blueprint for reversing this mindset and allowing youth to regain all they have lost. Before my accident I had very little self-confidence and didn't feel as though I mattered in the grand design of life. As an older man myself, I now know this wasn't true and isn't reflective of any young person in society. Read my books, learn about my life and let's work together to stop our elderly populous destroying the nation for everyone underneath them.

We'll prevent millions of brain injuries in the process, too," he adds.

About Rick Fernandez
I was born in Los Angeles, California, at the General Hospital. My parents immigrated to California from Puerto Rico, after the Second World War. My father finished only the eighth grade, and my mother finished the tenth. I have one older brother and one older sister. I grew in a lower-middle class neighborhood, and little expectations were put on me. I was not a troublesome child however, I was put in jail a couple times as a youth for minor infractions. I was always a follower—however, with eyes behind my back. You could say I had a lackluster childhood, and did just enough to get by. I never took care of my health as a kid, and suffered the consequences. I was absent from school half the time in the years prior to my head injury, and didn't know 'up' from 'down'. I knew I was a "flake" but there was no way I felt I could get out of it. However, I was slapped in the face with this head trauma, and I was blessed. 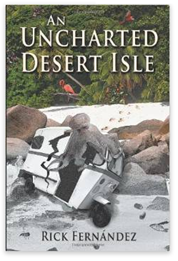