Masterfully crafted by D. Taylor in conjunction with 1Ton Comics, ‘Dead Run’ tells the end-of-days story of a horrific attack that sees New York City turned into a zombie playground where everyone is infected and nobody is safe from those they used to call friends. But it’s not just any old zombie story; Taylor and his team weave together an intricate storyline that originally started life as a screenplay. With its sharp twists and thought-provoking paradoxes, it's no wonder the original script was recognized by The Academy of Motion Picture Arts and Sciences/Nicholl Fellowship.

Brooklyn, NY -- (SBWIRE) -- 01/27/2015 -- While nobody can deny that Zombie thrillers have become something of a recent literary staple, both readers and critics are currently crying out for wholly unique new narratives that don't succumb to recycling of the "same old" concepts. Thankfully, D. Taylor and 1Ton Comics have stepped up to the plate with gusto; releasing a trend-bucking comic/graphic novel that takes the concept of zombies to a deadly new level.

'Dead Run' started life as a screenplay, carrying its cinematic feel over into a comic that perfectly fuses its gripping narrative with stunning imagery. It all culminates in an adventure that re-defines its genre while staying true to the zombie traditions millions have grown to love.

The lives of three strangers become entwined when a bio-terrorist attack unleashes a virus that transforms its victims into rabid killers. Their only hope for survival is to band together and make it to the last safe zone in New York City.

"What we have done is throw the compartmentalized concepts of "fast moving" and "slow moving" zombies out the window, stitching together a story that has both," explains Taylor. "This is something previously unseen, and it is causing quite a stir among critics."

Continuing, "We decided to set it right in the heart of Brooklyn to give it an aura that is frighteningly close to real life. Just like reality, the story is a cocktail of intricacies that extend far and beyond the simplicity of many other novels on the market."

Since its release, the comic has garnered a string of rave reviews. ZombiesAndToys.com comments, "The story is fast paced and bounces back and forth in time to provide a fuller picture of the action. There is a lot more going on here than your run of the mill zombie apocalypse story, and you are kept guessing what will be happening to our heroes next. If you are looking for something different to read and like zombies (of course you do) then pick up a copy and settle in for an action packed adventure."

Greg Madhere adds, "Let me start by saying I haven't picked up a graphic novel in ages, but I'm really glad that Dead Run ended up being my first read in a long time. I read this at the beach, and didn't put this down. The main characters are likable because they are well developed. The pacing is on point. The author builds just the right amount of tension in the story and amongst the characters themselves."

Mike Morra reveled in the book's links with the real world, writing, "If you love the zombie genre but are looking for a new twist than Dead Run is for you. The combination of compelling characters and a chilling setting -- NY City -- makes this an entertaining, fast paced, and scary read. This has all of the apocalyptic survival elements that one would expect and want, but raises the stakes by focusing on one the busiest cities in the world." 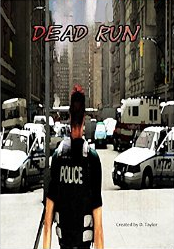