The Indiegogo Crowdfunding project is sought to support them for remediation of the Amazon.

Quito, Ecuador -- (SBWIRE) -- 01/27/2015 -- After an international trial against oil giant Chevron-Texaco that ran for 21 years finally came to a triumphant end in the result of a $9.5 judgment against this corporate juggernaut, justice has yet to be served. A victory on paper only, the 30,000 or so people and over 1700 square miles of rainforest hit hard by Chevron's activities have nothing to show for it.

That's because not a single penny of the court-ordered $9.5 billion award has been disbursed. 450,000 hectares of previously pristine rainforest and tens of thousands of people who have astonishingly high rates of cancer, leukemia and other diseases remain victims of corporate malfeasance with no relief in sight.

The Union of Those Affected by Texaco (UDAPT) which initiated legal action against Chevron and ultimately won the legal battle succeeded to obtain the its condemnation needs urgent help from responsible citizens of the world to go on with the information and communication campaigns on the case. At the same time the communities have to organize themselves in order to prepare the remediation of the damages. Chevron has to pay in order to enable the communities to prepare plans for the reparation of the damages to the rainforests they impacted or conceive health care plans to the 30,000 or so people that are plagued by endless barrage of health problems proven in court to be the fault of Chevron. The challenge is also to overcome the economic siege imposed by Chevron on social activists whose efforts to support the struggle for justice have been hobbled by this multinational corporate Goliath.

Crowdfunding in the amount of 30 000$ will be used to organize a powerful communication campaign in order to raise awareness of this impediment of justice as well as an outreach program to empower the indigenous people so they can prepare their plans for the remediation of the damaged rainforests.

Today every legal action initiated by Chevron to avoid the payment of the sentence delays the remediation of the contaminated land and rivers and causes victims every day. 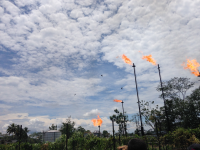