Masterfully crafted by David C. Edmonds, ‘Lily of Peru’ is the story of a Florida university professor's struggle to rescue the love of his life—Marisa—from a brutal war between the Peruvian government and a bizarre terrorist organization called the Shining Path. Marisa is supposedly a key player in the organization, or so the professor—Markus—is told by a Peruvian general. Markus's refusal to cooperate gets him followed, roughed up, and dragged before a commission investigating terrorism. He kills in self-defense and is soon on the run, desperate to find Marisa. But is she the woman of his dreams, the Marisa who goes limp with desire when he reads poetry to her, or is she the bomb-throwing terrorist of her wanted posters?

Tarpon Springs, FL -- (SBWIRE) -- 02/02/2015 -- While most authors produce fiction to provide readers with nothing but a quick thrill, David C. Edmonds is quickly building a reputation for intricate adventures that, as one reader put it, shouldn't be read if one expects a good night's sleep. His extensive travels in, and assignments to, Peru in the 1980s and 1990s exposed him to a culture under threat from a bizarre terrorist organization. While Edmonds won't say how much of the narrative is true, these experiences provided the inspiration for what is now 'Lily of Peru'.

The potential audience for the novel is huge, from those who enjoy international thrillers to the thousands of Peruvian ex-patriots around the world, and on to the tens of thousands of tourists who visit Peru each year.

"I've left him. It's over. If you still want what we've been talking about, I'm ready. No more excuses."

When university professor Markus Thorsen reads these words from the love of his life, Marisa, he abandons his work and flies to war-torn Peru, where government forces are battling a brutal insurgent organization known as the Shining Path. Once there, Markus hopes to whisk Marisa to safety—far away from her abusive Peruvian husband.

His plans fall apart as soon as he arrives, however, when a Peruvian general shows up at his hotel room with a host of accusations. Markus has to face the truth: Marisa has connections to the Shining Path. But is her involvement by choice or coercion?

Desperate to learn the truth and get her out of the country, Markus sets off on a dangerous journey with Marisa that takes them from Lima to the Andes and on into the eastern jungle. Along the way, they are pursued by counter-insurgency agents, elite soldiers, hostile natives, Marisa's husband, and even a man with a large jungle cat.

Markus planned on his Peruvian reunion resulting in happily ever after, but now he simply hopes he and Marisa make it out of the country alive.

"The locations in the book are 100% authentic," explains the author, "as are many of the incidents that occurred. I wanted to show exactly what can come between two lovers, and the extent they will go to in order to be together when travelling through a war zone. The heart stops at nothing."

Reader agree, leaving a slew of five-star reviews. P. Lopez comments, "WOW! Buckle up for an action packed thrill ride. Tag along on this fun, and sometimes funny, thriller as it takes you into jungles, tight spots, dangers, and troubles. Non-stop surprises all the way, with a few romantic encounters thrown in too. The exciting final will leave you very satisfied indeed. And how about that bird?"

Gino Bardi adds, "'Lily of Peru' is a deceptively tranquil title for the wild ride readers are in for when they pick up this new novel by David Edmonds. The intense colors of the eyeball-jarring cover should be a warning: Pass on this book if you expect to get a good night's sleep. Chances are good you will still be reading when the alarm goes off."

Laura Kennedy praises the author's tenacity, writing, "The author-- a former Marine, Peace Corps volunteer, Fulbright professor and government official with long experience in Latin America--writes with the conviction of a man who knows his territory. Which leaves us to wonder if the author was actually involved in some of those adventures. This one is a sure thing for my book club. But leave the kids at home. Lily of Peru is too hot to handle."

About David C. Edmonds
DAVID C. EDMONDS is a former Marine, Peace Corps Volunteer, Senior Fulbright Professor of Economics, academic dean, and U.S. government official with long experience in Peru and other countries in Latin America. He's the author, editor or ghostwriter of seven other books, including the award-winning Yankee Autumn in Acadiana. Dr. Edmonds grew up in Louisiana and Mississippi and studied at Mississippi Southern, L.S.U., Notre Dame, Georgetown, George Washington and American University. He currently lives in Florida with his wife, Maria. 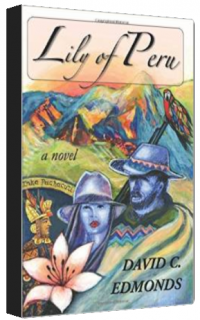