Then Like the Blind Man: Award-Winning Novel Depicts 1950s Southern Boy's Radically Shifting Racial Prejudices - Hailed "Destined to Be a Classic" by Critics

Masterfully crafted by Freddie Owens and loosely based on his own coming-of-age, ‘Then Like The Blind Man: Orbie's Story’ tells the story of a downtrodden nine year-old who is sent from the city to live with his grandparents in the outback of Kentucky, taking few possessions yet a heart and soul chock-full of hatred for black people. But his grandparents are mavericks of the 1950s south; transforming Orbie into a young man that battles through the demons of his generation to embrace compassion and racial equality. Raw, realistic and perfectly paced, it’s no wonder Owens’ masterpiece has already won multiple awards and over one-hundred five-star reviews.

Boulder, CO -- (SBWIRE) -- 02/02/2015 -- While fiction about the 1950s Civil Rights era is far from rare, few capture the period and struggles from the perspective of a white child. In 'Then Like The Blind Man: Orbie's Story', Freddie Owens depicts the coming-of-age of one nine-year-old protagonist whose story transcends fiction to capture the shifting racial prejudices that turned would-be racists into a generation that embraced racial equality.

Owens' work is now a multi-award-winning bestseller, taking home the IR Discovery Award for Best in Literary Fiction and reaching the finals for similar accolades from coast-to-coast. With critics churning out rave reviews and over two-hundred-and-thirty Amazon users rushing to leave their praise, the author's compelling style and choice of subject matter proves that independent publishing is no bar to success.

A storm is brewing in the all-but-forgotten backcountry of Kentucky. And, for young Orbie Ray, the swirling heavens may just have the power to tear open his family's darkest secrets. Then Like the Blind Man: Orbie's Story is the first person account of a white youth cast aside in the segregated South of the 1950s, and the forces he must overcome to restore order in his world.

Nine-year-old Orbie already has his cross to bear. After the death of his father, his mother Ruby has off and married Victor, a slick talking man with a snake tattoo. Orbie hates his stepfather more than he can stand, a fact that lands him at his grandparents' place in Harlan's Crossroads, Kentucky. Orbie grudgingly adjusts to life with his doting Granny and carping Granpaw, who are a bit too keen on their black neighbors for Orbie's taste, not to mention the local Pentecostal congregation of snake handlers. Soon, however, he finds his worldviews changing, particularly when it comes to matters of race, religion and the true cause of his father's death.

Equal parts Hamlet and Huckleberry Finn, Then Like the Blind Man is certain to resonate with lovers of literary as well as historical fiction, particularly in the grand Southern tradition of storytelling.

"I, and hundreds of thousands of other adults, see ourselves in Orbie," explains Owens. "I would spend my summers travelling from Detroit to be with my grandparents and relatives in what to me was the Kentucky wilderness. While my big city prejudices and toxic beliefs about 'hillbillies' were quashed there, my prejudices against 'colored people' were largely supported."

Continuing, "With each trip I became more and more confounded by a white culture that was extremely loving on the one hand and yet extremely prejudiced on the other. It wasn't until college and the advent of the Civil Rights Movement that I began to untangle this confusion. This story fictionalizes and captures aspects of this journey in a raw and uninhibited fashion. It is, I believe, the story of our nation."

Since its release, the book has garnered a string of rave reviews. Kirkus Reviews comments, "Owens captures his characters' folksy Appalachian diction without overdoing it and subtly reveals character through dialogue and description. A psychologically astute, skillful, engrossing and satisfying novel."

The San Francisco Book Review adds, "Every once in a while you read a book in which every element fits together so perfectly that you just sit back in awe at the skill of the storyteller. Then Like The Blind Man is one of these books."

Publisher's Weekly reveled in the novel's authenticity, writing, "In an American coming-of- age novel, the author presents a stunning story with clarity and historical accuracy, rich in illuminating the Appalachian culture of the time period."

Then Like The Blind Man is available to retailers, libraries, and educators at a 40% discount (Discount Code: REG) and returnable through Ingram Wholesale .

Kindle and Trade Paperback versions of the novel are available to consumers on Amazon.

NOTE: Reviewers can download a Digital Review Copy of the novel (made possible by IndieReader In-Store) from the book's product page in the Edelweiss Interactive Publisher Catalog. IndieReader In-Store is dedicated to dispelling the negative stigma associated with independently published books, i.e., that they are poorly written with subpar covers and poor interior design.

About Freddie Owens
Freddie Owens holds a master's degree in contemplative psychotherapy from Naropa University in Boulder, Colorado. Born in Kentucky and raised in Detroit, inspiration for his first novel, Then Like The Blind Man: Orbie's Story, came from childhood experiences growing up around Harlan's Crossroads, Kentucky. Life-long studies of Tibetan Buddhism and Advaita Vedanta in addition to his encounters with Native American Shamanism are also of note in this regard.

Currently Freddie Owens is at work on his second novel. He writes and performs poetry and has been published in Crystal Clear and Cloudy, Poet Lore, and Flying Colors Anthology. In addition, as a licensed professional counselor and psychotherapist, he for many years worked with both perpetrators and victims of domestic violence, providing therapies for individuals and families. 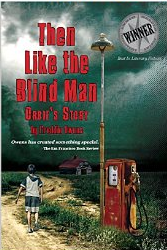