Reset: Thought-Provoking New Novel Urges Nation to Be Careful What It Wishes For, as Armageddon & Time Travel Collide to Form Oppressive New Confederacy

Masterfully crafted by William R. Jones, ‘Reset’ fuses a gripping story of greed, time travel and a re-imaged United States with a bold opportunity to explore American history through rose-tinted goggles. What would have happened had the south won the Civil War? Would the Civil Rights movement exist and, if so, which side would be the slaves? All of this and more is wrapped into a gripping novel readers won’t be forgetting any time soon.

Jersey City, NJ -- (SBWIRE) -- 02/02/2015 -- While most writers craft fiction to deliver readers nothing but a quick thrill, a compelling and hugely-illuminating new novel by William R. Jones transcends the norm to leave readers questioning every aspect of their existence.

'Reset' plays out amid impending nuclear warfare, an approaching Armageddon and a chance to travel back to the Truman administration in order to alter the course of history forever.

But…it's not quite that easy.

It's 2026 and Iran's nuclear threat has reached the point to where it's highly believed they intend to launch a missile strike against Israel before years end; an ultra-aggressive action, and one that would no doubt mark the beginning of World War III.

US intelligence, in anticipation of this threat, has constructed an interplanetary transport capable of travelling through time. The objective is to send the transport back to 1945 (post World War II America) and convince the Truman Administration of the need to destroy all remaining nuclear weapons; as well as any archived records related to their construction.

However, should the warning from the future not be enough to dissuade Truman and his administration from continued production of said weapons, the decision would be made for him through swift and decisive military action using weaponry unimagined in 1945.

As the project dubbed Armageddon seems to be moving along according to plan, a coup engineered by the racially biased head of the CIA takes the transport back to the US Civil war, and changes its outcome instead.

As we flash forward to 2026(post Armageddon) the coup proves to have been a success, as what was formally known as the USA has become the Confederate States of America. A unilaterally governed society split into two separate classes: Ruling and Sub. Slavery has been altered to a form of indentured servitude, with the former slaves making up the majority of the subclass.

With no true democratic process, comes zero hope for a civil rights movement. That is until some dissension arises amongst the ruling class. Persons previously on board with the coup align themselves with a subclass underground group of united rebels hell bent on undoing the gross injustice perpetrated upon humanity.

Together they devise a plan to combat the newly reformed Confederacy. And though it will take almost two centuries, and several generations of sacrifice, they prove that with determination and the ability to travel through time, 160 years of history can be altered in a matter of weeks.

"Millions would like to go back in time to alter history, but this book proves that it could land the world in a lot of hot water," explains Jones. "I urge readers to be careful what they wish for; sometimes we just need to let things play out, as if they were constructed in some sort of grand design. Playing with fate could produce a catastrophe."

Continuing, "But the narrative's most unique aspect is the opportunity it affords readers to explore many of the "what ifs" that cross their minds. What if the south had won the civil war? Where would the Confederate States of America be today? Would things like freedom of speech and religion exist? Would there still be slavery? Or some form of indentured servitude? There are thousands of questions that you can drag from the book, making great fodder for debate among book clubs or friends. Do you agree with each other, or are your views off the wall? Buy the book to find out!"

Those with a thirst for emotive reading that produces laughs, anger, compassion and wonder are urged to purchase their copies without delay.
'Reset' is available now.

About William R Jones
William R Jones works in the investment banking field but has always been an avid writer of fiction. He's written several screenplays and short stories. "Reset" is his first of hopefully many novels!. 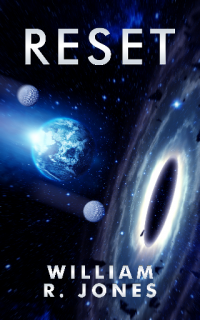