Random Thoughts the Diary of a Rude Girl: Compelling Journal of Rhymes & Letters Reaches out to Millions with Undiagnosed Mental Illness

Written from the heart and experiences of Donna P.K.S, ‘Random Thoughts the Diary of a Rude Girl’ is a collection of writings that ultimately prevented the author from committing suicide. Taking readers on a journey though Donna’s mind as it wears down under the weight of undiagnosed depression, the book brings solace to those who may also be self-medicating and ultimately self-destructing.

Calgary, AB -- (SBWIRE) -- 02/03/2015 -- There's no way to hide from the statistics, 10% of North Americans are walking around with undiagnosed mental illness. As someone once in that camp, Donna P.K.S. knows how soul-destroying it can be; enough that it almost drove Donna to destroy herself.

However, Donna found therapy by putting pen to paper in the most unique of ways. Now in a place where she acknowledges her illness and embraces formal treatment, Donna is releasing her journal in the hope it will help the millions suffering in silence.

Back when I was a teenager I was a loner. I started rewriting rhymes to fit my life but then I realized that it wasn't me on paper, those were the ideas of that artist. That's when I started writing my own rhymes, and what started off as just messing around turned into my own personal therapy. Each rhyme written was what I was feeling on that particular day.

As one reads, my mood changes and so do the rhymes. All the journal entries reflect what it's like to live with undiagnosed depression. I refused to take any prescribed medication and then I resorted to self-medicating with recreational drugs. Included in these journals are also personal letters written to my family and friends including ex-lovers. My thoughts are scattered and it's obvious I could never make a clear decision. Every time I felt good, something would find a way to bring me down. Writing was ultimately the only thing that saved me from committing suicide.

"While the book injects a lot of pain and misery into the mind of the reader, it is something almost everyone can relate to," explains Donna. "I always felt that I was suffering alone, but little did I know that 10% of the population comes from the same mold. This book is my attempt to reach out to each and every one of them, to offer them hope that is impossible to see in life's darkest corners."

Continuing, "My method of conveying my struggles was to put them on paper; but I actively encourage others suffering from mental illness to do whatever works for them. My book will allow them to see what went on in my head and how I dealt with it; also an eye-opener for those who cannot relate to mental illness or are struggling with caring for an ill relative."

With the book's demand rapidly increasing, interested readers are urged to purchase their copies as soon as possible.

'Random Thoughts the Diary of a Rude Girl' is available now: http://amzn.to/16lKSVo.

About Donna P.K.S.
The author lives in Calgary, Alberta. 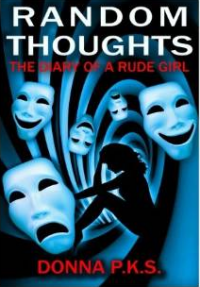