With an esteemed twenty-five-year policing career, ten of which were spent as Police Chief in a metropolitan Midwest town, Peter J. Puleo knows that his badge had many personalities. Some days it brought tragedy and death, and other times happiness and humor. Riding along life’s contours wasn’t always easy, but being a cop is something Puleo wouldn’t have changed for the world. In ‘Cop on the Scene: Life and Death on the Street’, Puleo compiles seventy-seven short essays into a unique memoir, cutting through Hollywood’s sensationalist depictions of Police officers to expose their world as it really is….

New York, NY -- (SBWIRE) -- 02/03/2015 -- As Paramedics hunched over the two drug dealers with blood spilling out of their bullet holes, Peter J. Puleo knew it would be another shift of confronting human mortality. While the dealers had taken the ultimate step of engaging in a shootout with the police team, they had ultimately lost, as they usually do. It was another day of putting their lives on the line while serving the community as police officers.

Puleo would rise to become Police Chief of his metropolitan force, able to view the ups, downs, sacrifices and victories of his officers from a unique perspective. Now retired and teaching criminal justice to tomorrow's law enforcers, Puleo is breaking silence on his experience through a fascinating new book.

'Cop on the Scene: Life and Death on the Street' comprises seventy-seven raw and uninhibited essays that form a compelling memoir of the author's career, a grassroots look at police work from the front line told through human interest stories that will grip anyone with an interest in the nuts and bolts of society, and how things can go so dreadfully wrong.

In this new breakout collection of essays, author Peter J. Puleo, a career officer and former police chief, tells it like it is on the streets from the cop's point of view, stories of what the average officer encounters every day and each night on the beat all across America. "Police", Puleo writes," intersect with the lives of others during times of crisis, when these goodly citizens have done something wrong, or bizarre, or careless, or when something has been done to them by other goodly citizens. These interactions are often brief, inexplicable, and lack the tidy beginning, middle, and end to be found so neatly packaged in police novels and movies."

Peter J. Puleo served nearly a decade as police chief of a metropolitan police department in the Midwest. He is also a Professor Emeritus of criminal justice at Harper College.

Puleo hopes that his volume will help the public better understand the motives, work and culture of those who don their badges with the sole purpose of protecting those in the community.

"Police officers and their work are very much misunderstood, so my book gives people a holistic look at the myriad of experiences we face on a daily basis, often not knowing exactly what we'll face at the scene until we arrive. At that point, we're committed to dealing with it."

Continuing, "Readers will get to see the physical and psychological toll it takes, its legal and ethical implications and how we're a 24/7 force that intersects with life at times of crisis and – believe it or not – times of great joy."

Since its release, the book has garnered a string of rave reviews. Judy Winikates comments, "Reading this book will give you an entirely new view and respect of what police men and women actually encounter to keep law and order. This book is filled with true stories of the average day in the life of a police officer. I went from crying, to laughing out loud, to shaking my head at some of the stories that proved to me what I already know... a lot of people are just plain nuts! This reads like a ride-along from the TV show "Cops" and WOW, what a fantastic ride!"

SMJ adds, "These stories were well-written and really interesting, from the most ordinary of calls to the most tragically horrifying. It also gave an insightful perspective on the human condition and the plights many of us may experience. It was emphatic, yet entertaining and often humorous."

Jennifer Hefferman found the book to be unique within the marketplace. She writes, "This book is not just another cop telling another story. It's written with detail and insight like you've never heard before. It's a MUST READ!"

'Cop on the Scene: Life and Death on the Street', from LLR Books, is available now:
http://amzn.to/1ESM2mM

About Peter J. Puleo
25 years as a police officer taught me that policing is all about crisis, big and small, and how cops intersect with the lives of others as part of their daily calling. There is no other pursuit that combines life, death, tragedy, humor, the sublime and the ridiculous, and it can change from day to day, and even from minute to minute. My book "Cop on the Scene" takes the reader on a ride-along to view these moments of crisis, and sometimes comedy. 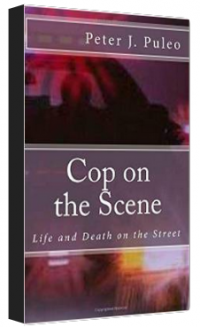