New Book Strums in with Ground-Breaking New Guitar Method; Now Anyone Can Play Chords That Rock the House with a Single Finger

Breaking new ground in the world of music, ‘Chason's New Guitar Method: The Easiest Way to Learn to Play’ showcases what is arguably one of history’s biggest shake-ups in the world of music tuition. While the guitar is traditionally difficult to grasp, even at a basic level, W.B Chason's patent-pending method will have anyone mastering a myriad of scales and chords. With one small tuning change and a logical new way of holding the instrument, wannabe guitar gurus can play with a single finger and become proficient in no time.

Tallahassee, FL -- (SBWIRE) -- 02/10/2015 -- While the guitar has existed in various forms since the twelfth century and is one of the world's most accessible and popular musical instruments, learning it remains a tough slog for many that defies natural dexterity. However, a game-changing new guitar method has finally been developed by one Florida-based teacher, and is now being shared with the world via a compelling new book.

The method in 'Chason's New Guitar Method: The Easiest Way to Learn to Play' may first sound fantastical, but it is proven; change the tuning of one string, hold the guitar differently and suddenly open up a new world of music that can be played using a single finger.

Forget the old "I'll Never Figure This Out" method of traditional guitar-we have put learning where it should have been from the beginning - EASY - along with re writing all the chords with dramatic results. You can now play lots of chords with a single finger! Our book is heavily illustrated and simple to understand. If you only buy one book for guitar , make it this one- in WEEKS learn more than you ever would in MONTHS of trying to play the old way!

"We literally took things back to the drawing board, fully aware that millions of potential guitar players give up within a few hours of trying to learn the basics," explains Chason, who has a patent pending on his creation. "The method applies to children, adults, left-handers, right-handers and even makes huge strides for autistic individuals."

Continuing, "It's all about learning a new way to form chords that makes sense to the brain and the body's natural movements. The traditional way of keeping the low strings on top of the fret board and the high strings on the bottom conflicts with logic and the natural layout of the hands. Our method keeps the low strings low and re-tunes the #6 string down two notes. This allows half of the strings to be controlled with just a single finger, and three-string chords suddenly become a breeze!"

The book and its methods have garnered early rave reviews. Gage Ridley comments, "This book has shown me how to play 4 songs I never could play before with the other guitar books I have purchased."

To accompany the book, Chason and his team have also created a series of wall charts, a "Root Chord"

card and other teaching aids, available from the official website: http://www.newguitarmethod.com.

About W.B. Chason
Asked to join twenty seven bands and playing infrequently with two, W.B. Chason has focused on songwriting as a craft since meeting the B-52's at Atlanta's Fox Theatre. He's recorded in New York, Nashville, Atlanta, and Miami in addition to his home base of Tallahassee and the Florida/Georgia line. A rocker by nature, he has written country, bluegrass, classical and easy listening songs and plans on the release of new material in the "very near future"- Stay tuned. 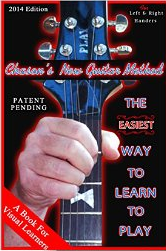