Meticulously researched by Harry Hall, ‘The Pedestriennes: America's Forgotten Superstars’ is the first book to tell the definitive story of the nation’s female endurance walkers; heroes of the late 1800s that set the stage for modern-day athletics and the women’s rights movement. Earning more money in one week that most earned in a year, the pedestriennes’ sudden downfall due to fraud, extortion and suicide is a story that needs telling…

Grand Prairie, TX -- (SBWIRE) -- 02/12/2015 -- Many people cite Billie Jean King's landmark 1973 victory over Bobby Riggs in the famed 'Battle of the Sexes' tennis match in Houston, Texas, as the moment when women began making a significant impact on professional sports. However, nearly 100 years earlier, a small group of female athletes traveled America, taking on and defeating men, and making a handsome living as professional athletes. Until recently, the stories of those athletic pioneers have been all but forgotten.

Between 1876 and 1881, a handful of female endurance walkers, called pedestriennes created a movement that would lay the foundation for modern-day athletics.

"The Pedestriennes: America's Forgotten Superstars" tells the little-known story of a handful of late 19th century female athletes who dazzled America with their remarkable endurance-walking performances. Performing in front of large raucous crowds who paid to watch their heroes, pedestriennes walked on makeshift tracks set-up in reconfigured theatres and opera houses. A single competition could last for days or even weeks. If successful, top walkers could make more money in one contest than the average American took home in a year; however, failure meant going home penniless. Newspapers reported on their achievements and interviewed the champions. Their walking outfits became fashion plates, their pictures were sold in stores and they made personal appearances as national celebrities. The pedestriennes' exploits reshaped the country's attitudes about what women could accomplish and established the foundation for modern sports, the revival of the Olympic Games and the suffragist movement.

"These women were remarkably advanced for their day; running an efficient and lucrative operation that employed coaches, managers, and trainers," explains the author, a veteran long-distance runner who has clocked a 2:27 marathon, "they travelled the country showing just what women could accomplish. But overreaching rivalries created bad press, an extortion attempt drove a manager to suicide; highly publicized sex scandals hurt the athletes' reputations and resulted in a murder."

Continuing, "Nevertheless, they set the stage for modern-day athletics and their influence must not be forgotten. They were part of what is now called, 'the first feminist movement,' and their impact on modern-day sport and society is equally as great."

Since its release, the book has garnered a string of five-star reviews.

Larry Enmon comments, "'The Pedestriennes fills an important gap in our athletic historical record. Honestly, if these feats weren't officially documented few could believe them. Anyone who ever ran a 5k, 10K or marathon owes a debt of gratitude to these women who blazed the trail for us over a hundred years ago. Well done, Mr. Hall."

F. Holmes adds, "Harry's story of these forgotten women adds more depth to the amazing accomplishments of these dedicated athletes in striving against all odds to make their mark on those wonderful years at the end of the nineteenth century. I think it is an interesting, well-written book and recommend it highly."

In 2012, the pedestriennes' manuscript was a prize-winning entry at the Mayborn Literary Nonfiction Conference.

As part of an early kick-off to Women's History Month (March) Harry Hall will be speaking at the Little Rock (AR) Marathon Expo on February 27-28.

About Harry Hall
In his 20 year writing career, Harry Hall's work has appeared in several publications, including Runner-Triathlete News, Mayborn magazine and The Dallas Morning News. Along the way, Harry interviewed celebrities such as Robin Roberts, Earl Campbell, Jim Courier, and Chuck Norris. He's covered a variety of amateur and professional sporting events, including the Byron Nelson Golf Tournament, US Olympic Track and Field Trials, and the Boston Marathon. A public speaking instructor, he wrote a book on overcoming the fear of public speaking, "Help! Everyone is Staring at Me." A one-time syndicated columnist and radio talk show host, Harry was named the Texas Dietetic Association's Media Personality of the Year, and is a member of the Mayborn Author's Guild. 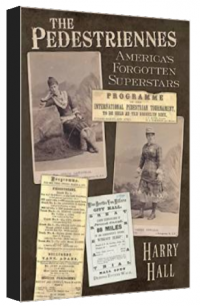