Conx2share, the 'Next Big Thing' in Mobile Apps Hits the Market

New York, NY -- (SBWIRE) -- 02/18/2015 -- The Conx2share mobile app officially launched on Feb. 17th and is now available in the Apple and Google Play Store. Conx2share is a new one-stop mobile application that controls virtually all digital communication. This app, developed by a Toronto-based company with an international team of innovators and developers, is being recognized as the "next big thing."

Conx2share has developed a set of revolutionary communication features that mimic non-digital relationships. "These features give the user the ability to create and share custom content through text, picture, video and blogging," explains Conx2share CEO/President HG Strickland.

Users can send a picture or video with or without text on top, wherever they want to place it. The recipient simply reads the text and taps the picture or video to clear the text and have an uninhibited view of the message. The app also includes a profile page, with a personal photo, that identifies the user.

The new app has received positive reviews from a host of media outlets, including CNBC and Yahoo Finance.

In addition to the communications features, Conx2share's social media component is the first designed from the ground up for mobile users and is created to seamlessly function as one social network. This integrated platform allows creation of customized contact groups, such as Family, Business Network, or Close Friends. As a communications hub, the mobile app will deliver user content to existing social media accounts with just an easy tap of the finger.

"All of our features have been fully integrated into a single platform that is specifically built for mobile users," Strickland adds, "It's easy to use, looks amazing and functions seamlessly. We're all very excited about the first release of this app and it will be consistently upgraded as our development team continues its work."

Upcoming features include, live streaming, eShopping, gaming, voice messaging, phone calls and video calls. In addition to features created for personal use, Conx2share is currently developing features created to help businesses connect with potential customers through its features that allow video embedding, pictures, and real-time content updates to make it easier to expose their business brand. This will include an option to have products sold directly in the app, to drive sales and increase conversation rates.

"Conx2share is a better way to do social networking and communicating in general," says Strickland. "In the past, people spread themselves over multiple networks. That's simply not an efficient way of doing things. You can bring it all together with Conx2share." 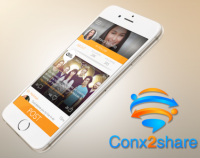