International Author Wants to Bring Adventures of Lily to Life

Cape Town, South Africa -- (SBWIRE) -- 02/23/2015 -- An exiting new Children's e-book series follows the trials and tribulations of a little miniature schnauzer, Lily, who grew up in San Francisco. The series is an entertaining representation of Lily's early life growing up in North Beach San Francisco, exploring Alaska, moving away from her friends to a far off and strange land and finally overcoming serious illness.

"Lily is the only Schnauzer in the world who has walked a glacier in Alaska and climbed Table Mountain in South Africa," beams Goosen, who has written five books about his favorite pet (two have been published and one is in post-production). "She was extremely brave, and with the help of a great doctor and the love of her owners, she recovered from her sickness. Lily serves as an inspiration for all of us."

The book series – The Adventures of Lily, the Amazing Miniature Schnauzer – is available in English, Spanish, French, Chinese and (very soon) German. E-book versions can be purchased from is Amazon Kindle, Apple iBooks, Smashwords, Kobo, Lulu, Google Play, Nook and many other digital platforms.

Goosen's latest project is to turn his most recent book, Lily's ABC Safari, into an animated e-book. This work is currently in post-production.

"The book is an ABC concept book about animals that you would see on an African safari," explains Goosen. "It would not only teach children the letters of the alphabet, but also expose them to some endangered species and the value of conservation at an early age.

"I really like this book and I want to make it into a more immersive and engaging experience for kids."

Lily's ABC Safari, the e-book, is scheduled for a March 2015 release. Goosen is hoping that the animated version will follow shortly thereafter.

He needs $3,000 in funding to realize this goal. In order to generate this capital, Goosen has launched an Indiegogo campaign, which can be viewed at www.indiegogo.com/projects/lily-s-abc-safari-animated-e-book

Donations of any amount are welcome and are rewarded with discounts on the Lily book series. For example, a $5 pledge gets you a Smashwords edition of Lily goes to Alaska and How Lily got her bling back. That's a 38 percent discount.

For $10, backers will receive a copy of the new animated e-book, Lily's ABC Safari. It will retail for $15 so that's a 33 percent savings.

"I'm very excited about this new book because it's colorful and fun, and a great educational tool," says Goosen. "I'm hoping that parents, grandparents, teachers and anyone else who loves kids or dogs will help back this project."

Goosen can be reached directly at steer@theadventuresoflily.com 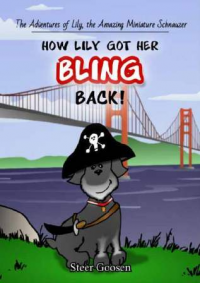