The US Football Academy is well known for providing summer camps and masterclasses, and has now launched weekend football camps to help young players master the fundamentals.

Glendale, AZ -- (SBWIRE) -- 02/20/2015 -- Football is America's most popular national sport, and millions of children around the country aspire to one day become football players. To do so however they must rise to the top of this highly competitive field. To achieve this they need to develop skills that outshine their peers. The U.S. Football Academy, a provider of Group, Team and 1 on 1 training in Arizona, and a provider of Seattle, Las Vegas and Arizona Football Camps in summer, is now offering Year round weekend Football Camps to polish those skills so that young players can develop at a rapid pace.

Coaches in Youth and High School Football rarely have the time to ground players in fundamentals, instead having to focus on teaching strategic plays. Fortunately, the U.S. Football Academy's new weekend training Camps aim to solve this very problem.

The Weekend Camps can be used as a way to supplement the coaching a player receives from his current team with professional, fundamentally focused skill development. The Camps takes place once a month From January to August at locations throughout Arizona. This is in addition to the Academy's one on one training and highly successful indoor Summer Camps.

The expansion of the camp's services in Arizona is a pilot scheme which, if successful, will see the weekend format expanded to their other territories in Las Vegas and Seattle.

Coach D.B., the Academy Founder, says "The time crunch that Coaches work under in schools and youth teams is unfair to coaches and players, and our priority has always been to support these institutions in getting the best out of players. Our weekend camps give young players ample time to focus on fundamental skills, drills and fitness development to make them the best player they can be. This in turn will make them more of an asset to their team. We look forward to seeing the next generation of NFL players in our forthcoming weekend camps."

About The US Football Academy
The US Football Academy is the first and best provider of year round Football training. Summer Camps, 1on1, Group and Team training is offered in Arizona, Las Vegas and Seattle. The company has just started offering weekend camps to help young players hone their skills and fundamentals, providing longitudinal development for those who may wish to pursue football as a career. 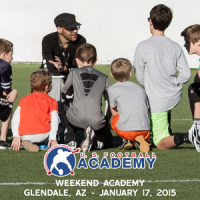