Bike Attack Electric+ took the space of former's Optical Shop of Aspen on 2904 Main Street, corner of Ashland. This is the third Bike Attack store in the area.

There were rumors for a while that Bike Attack Electric+ will be co-owned by a well-known figure from the film industry, but details were still kept secret. Until today when Bike Attack announced that their new business partner is film veteran Albert Cho, AD of Fast & Furious, Furious 7, Pirates of the Caribbean, Mr. And Mrs. Smith just to name a few. Albert Cho is also a long time cyclist and good friend of Ericson Monsalud.

Bike Attack started doing business 1994 in Berlin, Germany in cooperation with the US Army. It developed into one of the most popular bicycle retailers in Berlin. In 1999 owner Ericson Monsalud opened a second branch in his home town Venice, California and became the exclusive Germany distributor of brands like Bontrager, Merlin, Foes Racing and more. In 2004 Ericson and Andrew Smith opened their new store in Santa Monica on Main, just across the street from Urth Caffe and the rest is history. Bike Attack was one of the first retailers concentrating on electric bicycles in the US. In Germany, home country of Kitty, Ericson's wife, almost every other household owns an electric bike.

"Our original Bike Attack on 2400 Main was getting too small to showcase all the different electric bikes on the market. We needed to find a place close by to concentrate just on electric bikes", Monsalud says when we talked to him outside his original Bike Attack store. "The new store will concentrate mostly on electric bikes and some other alternative ways of transportation. We are fortunate to be able to lock in the best electric bike brands on the market: Stromer, Easy Motion, Felt, KTM and some very interesting newcomers. There are many electric bikes out there, we extensively tested all of them all and found only a few brands trustworthy and dependable. We fully stand behind all the electric bikes that we sell, we don't fall for any short-lived gimmicks. For us count best quality, good service and high warranty", he is adding. Electric bikes, or ebikes, are getting more and more popular and the trend is growing.

But aren't electric bikes only for lazy people? "Absolutely the opposite!", Monsalud says "It is proven that people who own an electric bike riding them up to 8 times more often than a regular bike."

Why is that, we wanted to know. "Because speed is the most fun part of riding a bike! Well, now you can ride fast, even if you're going uphill, if you are tired or when fighting a strong a head wind. At the same time you're moving your body, loosing weight and are out on the fresh air. Try it out for yourself. I've seen the most skeptical person turn into an electric bike fan after test riding one."

Grand Opening is scheduled for Saturday February 21st from 12pm - 6pm. Celebrities will be in attendance. For the others who prefer a regular bike, the original Bike Attack is just a couple of blocks away.

About Bike Attack Electric
Bike Attack Electric sells, services and rents electric bicycles. They also provide tours and demo rides. You can call them to schedule a rental at 424-744-8148 or check their website at http://www.electricbikeattack.com

If this isn't enough: the futuristic design of the store is worth the visit. 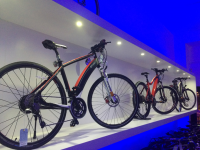