Avrek Law Firm’s Maryam and Melody Parman have landed a just settlement of seven million dollars after two people were hit by a truck while driving their vehicle at night.

Irvine, CA -- (SBWIRE) -- 02/20/2015 -- Justice is essential to the functioning of a modern society, but is all too often evaded. That is why lawyers must be passionate as it is through such passions that Avrek Law Firm's Maryam and Melody Parman helped secure $7 million settlement on behalf of their client Rosanna Moreno.

The details of the case involved two people being in critical condition after a traffic collision at Cherry Avenue and Grand Avenue in Beaumont. The Rosanna was a passenger when they rear-ended a parked vehicle with a flatbed trailer attached. This auto vs truck accident came about because the truck had no reflectors, meaning the collision happened at approximately 60mph. The car became lodged in the back of the flatbed trailer, and the driver fled the scene, leaving the Rosanna trapped in the vehicle.

The incident was reported at 9:25 p.m., and Cal Fire spokeswoman Melody Hendrickson reports that both patients were cut and rescued from their vehicles by 9:56 p.m.

Both were then taken to the hospital with major injuries, one via ground ambulance and the other via Mercy Air ambulance. Despite this action, Rosanna suffered severe brain injuries and is unable to look after her 2 minor children, Natalie, 7 years old, and Delilah, 8 years old.

A spokesperson for Avrek Law Firm explained, "What happened here is a tragedy, and it is the least we can do to try and see the scales balanced. This settlement goes some way toward achieving that, at least. We are pleased to say that the courts agreed with our assessment of the total prospective cost of the damage done not only to the victims themselves but to their children, who are also victims, now at risk of growing up without their mother."

About Avrek Law Firm
The experienced personal injury attorneys at Avrek Law Firm balance the scales of justice for injured clients by providing aggressive and thoughtful legal representation. With integrity, passion and accountability, Avrek Law gets results for injury victims and their families. For more information please visit: http://www.avrek.com/ 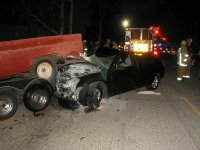