Houston, TX -- (SBWIRE) -- 02/23/2015 -- Andre Bramwell might be considered a bit ingenious, but by today's standards, he's definitely unconventional. Usually when it comes to being a part of the Hip Hop industry, thoughts of rapping, producing, starting a record label or even a clothing line, are most likely the first choices when one thinks of capitalizing on a culture with immense buying power. But that wasn't the case for the Houston-based businessman who decided to be more creative and partner with Hip Hop artists such as Riff Raff and Krayzie Bone to launch custom-wrapped candy vending machines and ATMS.

It was his out-of-the-box ideas that got him into the business of promoting and marketing artists while selling sweets and dispensing money, a venture that has presumably been profitable for him as he's currently in discussions with other Hip Hop artists and their representatives to launch a few more.

Bramwell initially founded the company, Candyman Vending Service, in 2010, starting out with gumball machines in the Houston area before expanding to a full line vending machine that offered snacks and soda. That was followed by a partnership with a local artist that ultimately led him to higher profile artists, ATMS, as well as Chris Chizer, club manager for VLive, Houston's #1 strip club, who contacted Andre to work with him and create the Vlive machine at the strip club after noticing his previous work. Only time will tell what's in store for the next round of expansion, but we do know that candy vending machines and ATMS just got little bit more interesting, so move over Tony Todd, there's a new candyman in town. 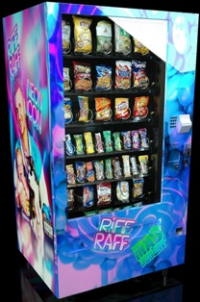