Adam Dreece’s ‘The Yellow Hoods’ series fuses classic tales and rhymes with the escapades of noble teenagers who stop at nothing to foil a plot to steal the world’s first steam engine plans. It all plays out in a world that gradually shifts from its 1800-esque charm to bare all of the hallmarks of steampunk; a playground for master inventors and the admirable teenagers that want to preserve their integrity. Volume one, ‘Along Came a Wolf’, sees the Kingkiller Chronicles meet the Hunger Games, in a debut hailed by critics as “Just the Beginning of a Wild Ride”.

Calgary, AB -- (SBWIRE) -- 02/25/2015 -- Young Adult fiction is undeniably popular, but something of a debate among critics and parents. While encouraging reading and immersing teens in worlds very different to their own, teenage protagonists that often "know it all" and solve the most aggressive evil with nothing but magic do nothing to broaden the horizons of their audience. Bucking these trends with gusto is indie author Adam Dreece, boasting a new steampunk series that that is as uplifting as it is engrossing.

'The Yellow Hoods' series is actually what the author has coined 'emergent steampunk', taking readers through five volumes that transform the world from its 1800s-like setting to a Steampunk playground. It's all melded with gripping adventure where everyday heroes promote good character and positive family values, and fairy-tale elements inspired by some of history's most cherished rhymes and stories.

'Along Came a Wolf' is the series' first installment. Prepare to meet a classic teen trio and explore a rich world chock-full of hallmark steampunk gizmos.

Twelve-year-old Tee peeked out from under her yellow hood and found herself looking down the barrel of a flintlock pistol. The agent at the other end of the weapon had been sent by her grandfather's arch-nemesis, and he was determined to get the plans he had come for.

"Not feeling so brave now," said the agent when he saw the simple metal rods in Tee's hands shaking. She knew his patience was nearly gone, and she had no idea what he was talking about. She wished Elly and Richy, her fellow Yellow Hoods, could help. She pressed the hidden button on one of the rods and prepared to leap.

Could her kindly, brilliant inventor, grandfather, Nikolas Klaus, really be a member of the secret society known as The Tub? Were his secrets going to cost him Tee's life?

Along Came a Wolf will take you from laughter, to the edge of your seat, to touching moments and back with The Yellow Hoods, the Cochon brothers and others on their first old world adventure.

"This is very much a layered story; one that will keep young readers on the edge of their seats while being dark and intricate enough to keep adults gripped. At the end of the day, my goal was to craft a series that the entire family could enjoy on different levels," explains Dreece, who has overcome severe medical misfortunes to prosper as a Calgary Herald best seller and Amazon Best Seller in multiple categories. "I've replaced the often intimidating and over-used elements of Steampunk, and created a society so deep and rich that readers can truly discover the world around them and feel the sense of change."

Continuing, "The characters are noble, brave and excellent role models for teens. I wanted to inspire and empower girls especially, by having strong female characters without resorting to a 'girl power' type novel. The characters use thought, measure and inventiveness to fight through their challenges, rather than magic that so-often misleads young readers into thinking that life is that easy."

The book's unique culture and message have sky-rocketed it to critical acclaim and over forty rave reviews on Amazon alone. For example, Laurence Lau comments, "Once I started to read The Yellow Hoods (Along Came a Wolf) I couldn't stop, or, if I had to, I couldn't wait to get back to it. There is a wonderful exuberance that it quickly obtains in the telling of this story; it is fast paced and inventive and I loved the characters, all of them, even those from the darker side!"

Author Michael W. Griffith said, "Along Came A Wolf is a wonderfully crafted tale that incorporates everything I love about steampunk with everything I love about fantasy. Its emotions are real, the pacing is pitch perfect for the adventure Tee and her fellow Yellow Hoods find themselves in. Adam Dreece is an author that you should watch, and Along Came A Wolf is a story you won't soon forget."

Dylan S. Hearn adds, "I would recommend this book to anyone who likes their adventures innocent, their heroes plucky and their villains just the right side of scary."

After volume one, more adventures wait. 'Breadcrumb Trail' was released in late 2014 and 'All the King's Men' is due to launch at April's Calgary Expo. Volume four is currently on the author's writing table. Readers are urged to start on the series without delay.

In the meantime, 'The Yellow Hoods: Along Came a Wolf' is available now: http://amzn.to/1DdOjJ3.

About Adam Dreece
Adam Dreece wrote short stories for friends and family, for 25 years. After horrible abdominal scar, followed by severe asthma, derailed his intense software career, he decided to make some changes, including never missing a night of reading stories to his kids again because of work, and going after his dream of being an author.

He spent three years writing a yet-unpublished memoir about his medical experiences and getting back up. With that out of the way, he was emotionally free and able to start writing fiction again. With a nudge from his daughter, he wrote Along Came a Wolf and created The Yellow Hoods series.

Adam spends time with his kids, his wife and engaging fellow writers and readers online. He's also a public speaker and mentor. He lives in Calgary, Alberta, Canada. 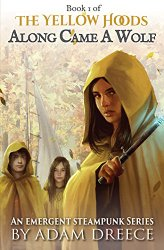