Bold New 'Military Sci-Fi' Novel Invites Readers to Pull Up a Stool in the Best Bar in the Galaxy, for a Dose of Intergalactic Wisdom

Masterfully crafted by Clayton J. Callahan, ‘Tales Of The Screaming Eagle’ follows the redemption of Jan, a lost grad student from Earth who winds up in a hardscrabble veteran’s bar at the edge of human colonization. Downtrodden and exhausted, Jan’s spirits are uplifted after engaging in conversation with Kilroy, a retired space adventurer with more than a story or two to share. As the narrative progresses, Kilroy and Jan spark up a unique friendship, and readers become privy to thought-provoking exploits that beat any conversation they’ll have at their local watering hole. Cheers!

Aloha, OR -- (SBWIRE) -- 03/04/2015 -- While Science Fiction has long been a staple of the literary landscape, both readers and critics are crying out for wholly-unique new narratives that don't succumb to recycling of the 'same old' concepts. As a Retired military man with a love of over-the-top bar stories, Clayton Callahan is stepping up to the plate, or rather the bar, with gusto.

'Tales Of The Screaming Eagle' thrusts readers into the galaxy's most unique veterans bar, where one local has enough stories to not only keep the night young, but change the life of a broke and emotionally-train wrecked Earthling. And even if they can, will the kid be able to survive what comes through the door next?

In this science fiction story, The Screaming Eagle is a hardscrabble bar at the edge of human colonization. Veterans are welcome, but others can come too if they want. This includes a lost grad student from Earth named Jan Paulski.

The kid's had a rough time out on the ragged frontier; he barely survived a raider attack before stumbling into the bar with a gut full of guilt. Now it's up to the old Kilroy, retired space adventurer of the legendary starship Vagabond, to help get poor Jan back on his feet. Kilroy has traveled the galaxy in a long life of fighting hostile aliens, loving beautiful women and surviving the hardest of hard times.

Chapter by chapter, Kilroy unfolds to story of his life to the kid to teach him what it really means to be an "all-right guy." The lessons come in the form of stories of love, war, trial and epic misadventure. These are more important lessons than Jan ever learned in college. It's what life is all about and he needs to learn fast...or he might not survive what just walked in the door.

At its core, the narrative explores the human experience, the life-changing qualities of wisdom and what it means to be an "all-right guy." To a military person the term all-right guy or gal conjures the image of a person you can always rely on to do their best for the team and give straight answers to tough questions. Superheroes they are not, but all-right folks are the backbone not only of military society but the world as we know it.

Since its release, the book has garnered a string of rave reviews. Raymond O. West (a former navy medic who served in Vietnam) comments, "While The Screaming Eagle is clearly Sci-Fi, its characters are so thoroughly developed, story line so compelling, dialogue so natural, that it excites all tastes and preferences. Future tales give witness to humanity continuing, while retrospectives speak to the strengths that brought us to great accomplishment. Callahan blends the two so believably that it makes you happy to be a member of the human race, and longing to be part of his story."

Theodore R. Blasche (a former army officer who also served in Vietnam) adds, "Go to the farthest reaches of civilization and you'll find the misfits, eccentrics, and oddballs that belong nowhere else. Callahan's "Tales of the Screaming Eagle" is about such a place and the rich yarns its inhabitants spin. Sometimes happy, sometimes sad, but always unique and entertaining, these cast offs from society show their grit and humor as they struggle to survive. I thoroughly enjoyed the flavor of the book and hope to see more of the characters in the future."

'Tales Of The Screaming Eagle', from Double Dragon eBooks¸ is available now:
http://amzn.to/1DHrTjv

About Clayton J Callahan
If Clayton Callahan's stories seem highly realistic it's because he's made his living principally in the "uniforms and guns" professions. Just out of high school in the 1980s he first served in the US Navy with an anti-terrorist unit. After 9/11 he enlisted in the US Army and is now an Iraq War veteran twice over. Between active-duty deployments, he's worked as a deputy sheriff, a correctional officer, and as a federal special agent for US Army Counterintelligence (lots of great stories there, can't tell any of them).

His focus is on science fiction, but also has been known to dabble in spy thrillers, game design, and non-fiction works. 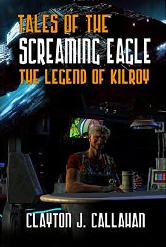