Masterfully-crafted by John Wendell Adams, ‘Betrayal’ calls on the author’s almost three-decades in the corporate world to lay bare the devastating betrayal that destroys the lives of millions. While the narrative is fictional, the book’s chilling congruence to the real world will have readers exploring the causes of familial and work-related betrayal, their retaliation to it and how to find forgiveness while reconstructing their new life. Readers of this book will experience an incredible page-turner that details the betrayal in each of the character’s lives while illuminating betrayal experiences in each reader’s life. Transcending literature, Adams plans to use his book as the catalyst for a series of compelling betrayal seminars starting in and around the Chicago area and the wider midwest.

Skokie, IL -- (SBWIRE) -- 03/06/2015 -- While betrayal just seems to be part and parcel of the modern world, its aftermath can shipwreck a person's life, spark dangerous retaliation and cause people to view everyone around them with a sense of mistrust. Nowhere is betrayal more prevalent than the business world and, having spent almost three decades at its helm, John Wendell Adams knows the dangers first-hand.

Betrayal itself is a tough subject to address, leading Adams to craft a novel that not only exposes corporate America's moral failings, but showcases the hurt and outrage betrayal causes when instigated by those who were supposed to be family, close friends or lovers. Adams' novel builds the foundation for a series of real-world seminars for those who have suffered betrayal's wrath.

Suspenseful new novel set in Chicago explores how one man copes with unscrupulous colleagues bent on his destruction.

Betrayal. It's an ugly word, and virtually everyone has experienced it in one form or another. The question is, what do you do about it? Seek revenge? Recover and go on? Or allow rage and despair to destroy everything you've ever worked for?

In his riveting debut novel, author and longtime businessman John Wendell Adams details the story of a man caught in an ugly web. Jack Alexander has landed a great job as a divisional director of sales in a Chicago-based IT company. Hired to turn around a regional disaster, he is rewarded with additional responsibilities. The problem: his vitriolic new boss, a co-worker's unwanted advances, and their secret conspiracy.

Fired from his job, forced to confront both his present and his past, Jack goes through an emotional tailspin before he is able to reconcile what has happened to him. Eventually, he's hired as a vice president with a much larger firm. When his new company decides to acquire his old one, Jack comes face to face with the two people responsible for his earlier demise. Meanwhile, he uncovers some illegal activities that could put the acquisition at risk.

Is this the time for revenge, to right the wrongs that have been done to him? What should he do? Is it possible to act effectively and also with integrity when confronted with those who compromised his marriage, his career, and his sense of self-worth?

"Writhing under the cloud of betrayal is as toxic as the betrayal itself; leading people to aggressively retaliate against the betrayer, their family and possessions, while shutting off portions of your life in fear that it might happen again," explains the author, who has devised a myriad of coping strategies after leading hundreds of staff through various management roles. "They instead need a blueprint to forgive themselves, forgive their betrayer and reconstruct a resilient new life even more fruitful than the one they had before."

Continuing, "This book exposes the current epidemic, provides an introduction to some coping skills and hopefully motivates people to confront the betrayal in their own lives and then choose to attend one of my upcoming series of seminars. They are designed to help people face betrayals that likely have been buried and start to take the necessary steps to fully rebuild their lives. Families, relationships, and the corporate world are chock-full of moral failings, and I know that tens of thousands are crying out for this book."

But the book doesn't just address betrayal from a workplace perspective. As the author attests, some of the most aggressive betrayal can in fact come from those closest to the victim.

"As sad as it is, betrayal often seeps into what should be a loving relationship. Our protagonist gets snubbed by his fiancée and, once he partially recovers from the hurt and pain, he decides never to trust anyone ever again. He starts to "date around" while purposely waiting for an opportunity to find enough fault in order to move on. On a more shocking note, the book also portrays an antagonist who, after trusting someone she meets at a party, becomes the victim of rape; an assault that causes her to turn to alcohol in order to hide her embarrassment. These fictional examples are microcosms of the daily betrayal people experience at the hands of those closest to them. There really is something in this story for everyone."

Readers agree, leading to a slew of positive reviews. Sharon Coley comments, "Betrayal is a self-help book, it reviled real life stories of how temptation can slip in undetected, and spin a web of deception with devastating effects. Jack shows great courage and integrity in the work place."

Another reader adds, "An intriguing, captivating page turner. It was easy to get swept up into the life of the main character and hard to put down. You walk away with a fresh perspective of dealing with being betrayed on any level."

Joe C. sees huge potential for the book's real-world application. He writes, "Betrayal is a very riveting book. I think it would be a "fun" supplemental reading assignment in any course on business ethics. A great start for first time novelist John Wendell Adams. I'm looking forward to his next book."

For more information on the book and upcoming seminars, visit: http://www.johnwendelladams.com

About John Wendell Adams
With more than 25 years of experience in management, marketing, and sales, having degrees in business and management development, Mr. Adams has held a number of senior leadership positions and assignments, including Aragon Consulting Group and IBM, which stretched across domestic and international markets. These experiences served as a catalyst for his newly published work of fiction. John didn't become a writer until later in life. He lost his father in 1990. It was very difficult on John. As a way of coping with his loss, he started writing about the experience. Over the years, he continued to write as a way of dealing with his emotions and capturing the essence of moral failure and reconciliation. John is an avid reader of both fiction and non-fiction. A few of his favorite authors are John Grisham, Jim Collins, David Baldacci, Joseph Finder, Malcolm Gladwell, Randy Singer, Jeffrey Archer, D.L.Buffa, John Maxwell and Rick Warren. John has conducted several seminars and speaking engagements around the country. In addition, he is involved in various charitable organizations. He and his wife, Grace, have five children and currently live in Skokie, Illinois. 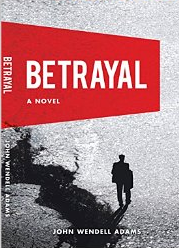