Inverness, UK -- (SBWIRE) -- 03/09/2015 -- Wesley Grant Parke of Scotland is not just a filmmaker who enjoys the outdoors. Parke is a true nature lover, environmentalist and protector of wildlife. He lives what he films.

His latest film project, which is still in the planning stages, is titled Stag's Breath and will explore the plight of red deer in the remote Scottish Highlands as well as the unsung "Stalkers" who devote their lives to the welfare of the herds.

"A stalker's role is to ensure the survival of the herds by the selective culling hunting off the weak, thus protecting the strong," explains Parke. " Selective culling keeps the size of the herd manageable and prevents a prolonged starvation period over the winter months.

"Stalkers are critical to the survival of the herd as they stop poaching, look after the lands and ensure good feeding for the deer. Their love of the red deer is unquestionable."

The film's theme is survival. Not only do the red deer battle the weather and terrain but also wildlife crime, poaching, government policies and needless slaughter by the forestry commission and other agencies.

"The reality of natural selection by nature can be cruel," Parke says. "We will spend two years filming this project. This will cover all seasons and show real-life situations as well as the harsh reality of nature. Our hope is that the film will bring much needed support for our diminishing herds of red deer."

Stag's Breath is an important piece of work and comes with a price. The two-year budget for filming, crew, technical work, music and licensing is $250,000.

In order to generate this funding, Parke has launched an Indiegogo campaign, which can be viewed at https://www.indiegogo.com/projects/new-film-production-of-stags-breath

On the Indiegogo page, you can view a trailer of Parke's previous film about fly-fishing in Scotland.

Donations of any amount to support the production of Stag's Breath are welcome. For a contribution of $35, backers will receive a Stag's Breath coffee mug. A $75 pledge is rewarded with a premiere download once the film has been released into the theaters.

For $50,000 you can become a cast member in the film, flying to Scotland, staying in a five-star hotel and spending two days on set. "You'll be taken by the stalkers into the hills where you can watch and hear the magnificent stags call and battle for dominance," says Parke.

The film is expected to be controversial. "It will, however, show the passion, love and devotion of the Highland Stalker towards the herds," notes Parke.

Parke can be reached directly at info@flyfishdreamer.com 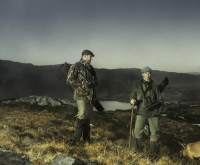