Oegstgeest, Netherlands -- (SBWIRE) -- 03/11/2015 -- Having been rejected many times by traditional publishers, the American pensioner Manny Steinberg (b. 1925) turned to a small Dutch Publisher to publish his Holocaust Memoirs.  Recognizing its quality, Liesbeth Heenk did not hesitate for a second.  Outcry - Holocaust Memoirs turns out to be a huge international success.  Survivor Manny Steinberg is a best selling author now.

In early March 2015 the eBook was downloaded more than 60.000 times in two days. Heart-felt reviews are flooding in daily. The story of Manny Steinberg, who survived four German camps together with his younger brother and father has clearly captured the hearts of people around the world. It may well be that 58 percent of Germans think it is time to put the past behind them, but the rest of the world thinks otherwise.

The moving autobiography is told through the eyes of an old man forcing himself to relive years of suffering, and touches the reader with its directness and simplicity. It is an account of human cruelty, but also a testimony to the power of love and hope.  The memoirs were written to fulfill a promise the author made to himself during the first days of freedom.

By writing Outcry, the author wants to ensure that the world never forgets what happened during WWII.  Next project will be finding funding for a movie.

On the 11th of April the publisher and author will meet for the first time during the celebration of the liberation 70 years ago of his camp in Vaihingen (Germany). Mr Steinberg's children will speak during the ceremony. It is bound to be the last congregation of Holocaust survivors in view of their age.

Outcry – Holocaust memoirs by Manny Steinberg is available as Kindle eBook and paperback (179 pages), an audio is being produced: http://www.amazon.com/gp/product/B00NVESZ7C/ 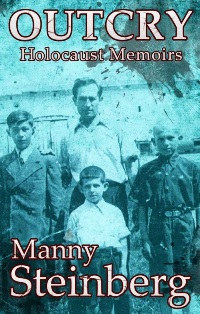