'Stories from the Pen' – Prisoners' Heart-Wrenching, Gut-Punching Essays Provide Rare Insights from Behind Prison Walls and Inside Their Hearts

Compiled and edited by Teresa X. Roberts, ‘Stories from the Pen’ brings together the experiences, heartfelt wisdom and inner-most thoughts of two prisoners currently serving in time in state prisons. From their daily struggles to survive, to their most heartfelt personal thoughts and feelings, Roberts’ groundbreaking volume ultimately exposes the broken prison system’s total inability to rehabilitate.

Mercer Island, WA -- (SBWIRE) -- 03/09/2015 -- Right now, at this very moment in time, 2.2 million Americans are in prison. Only a small fraction committed violent crimes, yet up to 70% will be released only to reoffend. Through her extensive contact with those behind bars, Teresa X. Roberts knows that the system doesn't work – and there's a fatal juxtaposition that treats inmates worse than animals, yet expects them to go back into society rehabilitated.

In an effort to remind the nation that prisoners have hearts, hopes, and dreams just like the every human, Roberts has compiled a book that sees two men currently serving time bare their souls on paper.

'Stories from the Pen', the first volume in the 'Convicted Creations' series, showcases life in prison for what it really is.

Stories from the Pen is written by two men who are both loved by those who know them and hated by those who have never met them. They both have families, friends, and enemies. They both have a beating heart that is human. They are also both inmates. They sometimes see eye-to-eye on life in prison or life in general, and other times they couldn't disagree more.

"It may be hard for the average good citizen to imagine how our hearts ache with sadness and longing for our loved ones. While I'm serving my decade-long prison sentence, whether I'm on the weight pile or in the hole for a fight on the yard, there isn't a moment that goes by that I don't wish I was holding a little pink cup having a tea party with my baby girl instead of being here."

"I know society views criminals with a judgmental eye, and it's for a good reason. We are criminals. But sometimes good people do bad things for dumb reasons. Society has lost sight of the fact that despite their criminal actions, inmates are still humans. Every action has a cause. If we could focus on the causes and their eradication, perhaps we could also find a path that leads to more smiles and laughter instead of regrettable tears of pain."

"Taxpayers are being deceived – the billion+ dollars they spend each year on the prison system achieves very little in the way of rehabilitation. Prison is mostly a holding compound for people who committed non-violent crimes who will endure abuse, mistreatment and then be released back into society to fend for themselves," explains the author, who has also written and published 'Why I Married a Murderer and How I Survived the Divorce'. "It's like putting a pit bull in a cage, poking it with a stick for 2 years, then releasing it in a room full of children and asking it to 'behave'".

Continuing, "People need to remember that – whatever an inmate did – they still have a human heart and often remain valued members of families and communities on the outside. In fact, prison often takes good people who made a bad choice and makes them worse. The authors' goal with this new series is to share the voices of the inmates themselves and tell their stories, expose the injustices and challenge the tax-paying public to demand change—true rehabilitation."

Since its release, the book has garnered a string of rave reviews:

Phil comments, "I thoroughly enjoyed the vulnerability, humor, perspectives, and overall humanity demonstrated by the authors. I learned more about what prison life is really like than I thought possible. I really felt present with the authors, as though I was experiencing their joys, their hardships, their emotions. Highly recommended for anyone who has a loved one in jail or anyone curious as to what goes on behind closed doors: the good, the bad, and the ugly."

Nikki adds, "A great read. Many eye-opening accounts of how life really is for those on the inside, while gently reaching out to enlighten those of us on the outside. A nice collaboration of efforts."

'Stories from the Pen' is available now: http://amzn.to/1Ktc46G.

About Teresa X. Roberts
Teresa X. Roberts is very compassionate about homelessness, mental illness, people who suffer with addictions, and broken justice systems. Her goal to help society see that no one is all good or all bad. She believes that all humans have hearts capable of both love and hate. 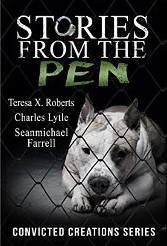