Written from the heart and experiences of a lifetime’s cooking by author Andrew Szava-Kovats, ‘A Pinch of Paprika: Cooking from Memory’ makes this enigmatic spice the star of the show in an exploration of culinary influences spanning Asian, Cajun, Hungarian and Italian. Readers will never see Paprika in the same light ever again!

Lowell, MA -- (SBWIRE) -- 03/10/2015 -- Andrew Szava-Kovats spent much of his early childhood in the kitchen, fostering a passion for cooking that still sizzles more than fifty years later. Born to Hungarian immigrants, his palate was broad from an early age and expanded by that magic ingredient: Paprika.

Having discovered not only how Paprika can become the star of any kitchen cupboard, but also how versatile it is in cuisines from many different countries, Szava-Kovats compiled what he learned into a fascinating, surprising new cookbook.

'A Pinch of Paprika: Cooking from Memory with Andrew Szava-Kovats' urges readers to grab the Paprika from the back of their cupboard and prepare to explore the culinary world.

Paprika has long been shrouded in mystery, obscured by other ingredients and trends, and generally neglected.

This book shows you what you can do with that Paprika can that's been abandoned in your spice rack.

From soups to mains to sides, this collection of recipes includes Asian, Cajun, Hungarian and Italian influences. See how simple and delicious familiar dishes like Gulash and Paprikas can be to make. You'll find new variations on old familiar dishes - like chicken soup and beef stew - as well as new dishes that will transform your perception of Paprika as an ingredient.

Explore the power of Paprika to transform simple things like potatoes into something elegant and full of flavor. There's something for everyone: Low Fat recipes, Vegetarian recipes, Soups, Sauces and Main courses.

Let yourself be seduced by the sweet, peppery power of Paprika!

Paprika has been upstaged by other ingredients, forgotten in the folds of time and generally misunderstood by the modern home cook. What many people don't realize is that it's the perfect primary flavor in soups, main courses, salads and a host of other wonderful dishes.

"I think of cooking as an improvisational art form – like Jazz – where we create and mix harmonies and disonances that play off each other in the mouth."

"There are recipes in this book for every taste and palate. I hope to inspire a passion for Paprika in people who otherwise may have neglected it. Explore the book with an open mind, because you're sure to become a Paprika lover like I am."

'A Pinch of Paprika: Cooking from Memory with Andrew Szava-Kovats' is available now: http://amzn.to/1EjwwDm, http://www.APinchofPaprika.com

In addition to writing four other books - currently on the market - Andrew also produces music and documentaries.

He began cooking at age 3, and always loved the kitchen, but not the heat. He's been tinkering with cooking ever since. His approach has always been to improvise on recipes, rather than follow them. He has never been good at taking direction! Not to be pigeon-holed, Andrew's many interests have lead him to pursue many different artistic expressions. With a BA in Philosophy, what else would he do?

In the 1970s, Andrew took up painting. In the 1990s he developed his signature style: "Quadretti"- which combined concepts from computer art and tile art with a textural, painterly approach to oil painting.

In the 1980s, Andrew was highly active in the "Underground Music Network," and since then has produced more than 70 records, which have appeared on record labels in Belgium, France, Germany, Brazil, Portugal, as well as his own record label in the USA.

With the dawn of the new millennium, Andrew expanded his interests into video production. Beginning with music videos to accompany his music, by 2009 he branched out into documentaries. The first was "Grindstone Redux" – about the 1980s underground music scene, followed by "The Last Farm in Lowell."

Funded in part by the Massachusetts Arts Council, it portrayed a local farm that has been an institution in Lowell. It was followed by "The Last Pow-Wow Oak" - also funded by the Arts Council, an historical documentary that documented the last days of a 300 year old tree that a local citizens group tried to preserve, until it was felled in 2012. After that he went back to music history with "Let's Go to The Rat" - which documents the world famous nightclub in Boston, during the heyday of the birth of Punk culture.

Last year, Andrew created book versions of his documentaries, where the material could be expanded. 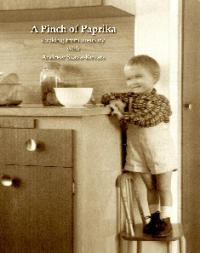