Masterfully crafted by Edward Jakubik, ‘The Doll Collector’ follows the work and struggles of a tireless detective trying to crack the case of six girls who each go missing just before their seventh birthday. But Beck McManus has demons; the kidnapping of his own daughter three years previously means that this case is chillingly personal. Jakubik’s celebrated gritty narrative has already been hailed “absolutely compelling” by critics.

Spring Lake, NJ -- (SBWIRE) -- 03/23/2015 -- While most authors use their debut release to do nothing but simply test the literary waters, Ed Jakubik's lifetime's passion for gritty fiction is allowing his first novel to compete with its genre's bestsellers.

'The Doll Collector' is a psychological thriller steeped with emotion and suspense. Being a cop is tough enough, but Beck McManus has to fight through it all while shrouded in the grief from his own daughter's disappearance. This case is about to get frighteningly close to home…

Follow Special Crimes Unit Detective Beck McManus and his hunt for the Doll Collector. Six little girls—each about to turn seven years old—go missing in broad daylight without a trace.

McManus and his long-time partner, Evan Graves, are tapped to head the investigation despite virulent protests from the police commissioner, who cites McManus' own daughter's kidnapping three years prior as evidence of his unsuitability. That case was never solved, and his daughter's disappearance nearly cost Beck his career—and his sanity.

"I wanted to write something wholly-unique, fast paced and steeped in tension," explains the author, who has been heavily influenced by the work of Thomas Harris and William Diehl. "McManus is in quite a mess; his daughter had been kidnapped, the trauma has developed a fierce substance abuse problem and all of his spiralling emotions are now about to be bundled into this one case."

Continuing, "At its heart, the narrative explores human suffering, struggle and the toll that high-profile criminal cases have on the mavericks fighting them."

Since its release, the book has garnered a string of rave reviews. Michael J. Sisk comments, "After 34 years in law enforcement, I was thoroughly impressed with The Doll Collector, having read it on my Kindle. The author captured me early on with crisp and clear writing leaving me in eager anticipation about what was to come next. After but a few pages I not only identified with Beck but grew to understand and respect his role in law enforcement."

Evie Mullane adds, "This is a first rate thriller and a damn fine detective tale. Picked it up and once I started could not put it down. Read it most of the night and loved it. Hope there are a lot more to come."

About Ed Jakubik
When Ed Jakubik first read Red Dragon by Thomas Harris in the summer of 1987, he immediately knew that he wanted to write a novel. Drawing upon his life experience coupled with a vivid imagination, Ed set out over a ten year period to pen his first novel, The Doll Collector, a psychological thriller written in the vein of works from his literary heroes like Harris, William Diehl, and Stephen King.

Ed grew up in Bayonne, NJ— a neighborhood that was more impressed with how far you could hit a stickball rather than how creative you could be. Luckily, he was cognizant of the 'signs' his higher power set forth and he began his journey. Ed has enjoyed a successful sales career for over a decade which helped mold a tenacious, never back down attitude towards his true passion— writing.

Ed and his wife, Maria, have two children; Jack and Lily. They reside in Spring Lake, NJ. Ed is a graduate of Castelton State College where, in 1995, he received his Bachelor of Science degree. Ed is also a proud graduate of St. Peter's Prep of Jersey City, NJ. 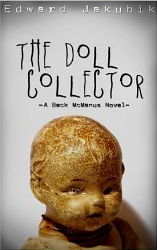