Jay Falconer’s ‘Glassford Girl’, part one of ‘The Emily Heart Time Jumper Series’, follows the plight and adventures of a homeless young woman who has no idea that she has been genetically altered against her will. Even worse, the slightest shred of emotion could send her jumping through time by a force she can’t control. All she wants is her old life back…and readers are invited along for the ride.

It's all exposed in Jay Falconer's 'Glassford Girl'. This genre-bending tale features a tireless homeless protagonist who unwittingly finds herself subject to a cruel genetic experiment. Be sure not to get too emotional, as the results could be life-shattering.

Emily Heart is homeless and living on the street, fighting to stay alive in Glassford Park. But it won't be easy, even when time slows and she gets fast. Not when any burst of emotion could send her randomly jumping across time and space, arriving naked and alone.

Emily doesn't quite know what she is, or what she's capable of, but she knows what she can't afford to do -- feel anything.

And she can't afford to make any mistakes.

"I didn't want to pigeon hole this novel, nor fall into the clichés of traditional fantasy," explains Falconer, a prolific writer. "It's a fast-paced cocktail of Sci-fi, adventure, genetics, the paranormal and romance – all wrapped up into a coming-of-age story that readers won't be forgetting any time soon. I wanted to create something that was the polar opposite of the lives teenagers face. While they are usually more than happy to get dramatic and emotional, Emily has to run away from her inner-most thoughts and feelings to prevent them from becoming her downfall."

Continuing, "It's just the first volume of a new series, with part two due just released. I'm not going to say too much else or I'll ruin the suspense; but let's just say that the most emotional times of Emily's life are yet to come!"

Readers have swallowed up volume one, leaving a slew of positive reviews in their wake. One Amazon user comments, "This book is absolutely amazing. I read it in one sitting. Time travel is not a new concept neither is time jumping. What is different about this book is the way the author uses these concepts. The book has all you would expect in a sci-fi, with some twists and turns along the way."

Lee A. Wolff adds, "This book is a real page turner! The attention to detail makes everything so realistic. I really felt like I was running down that alley, barely able to catch my breath."

Celine Crow literally couldn't put the book down. She writes, "For me it was a short read that I was able to finish in one setting. It's almost two hundred pages, but the story and the action flow well enough that it was easy to finish without stopping for the night or to take a long break."

About Jay J. Falconer
Jay J. Falconer is an independent author, publisher, blogger, editor, engineer, and sci-fi junkie who lives in the mountains of northern Arizona where the brisk, clean air, and stunning mountain views inspire his work day. He is the author of the critically acclaimed Narrows of Time book series.

You may also connect with him on Facebook: Facebook.com/NarrowsOfTime

Mr. Falconer is currently developing an all new action Sci-Fi series called Redfall, The Flames of Tomorrow. The first season is expected to be released in late 2015. 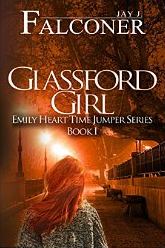