Masterfully crafted by Dominic Certo and Dr. Len Harac, ‘Gold in the Coffins’ follows the plight of a team of retired Vietnam Marines who finally get to make their life’s sacrifices pay off, by taking their company public. Little did they know that the Street’s military-like power would crush them, cheat them of everything they own and even leave someone dead. In a unique fusion of reality and fiction, the authors pay homage to former servicemen and women who discover that life’s most fierce battles will always be fought at home.

Loptacong, NJ -- (SBWIRE) -- 03/23/2015 -- While everyone complains of stressful jobs that come with too-long hours, too much stress and a far-too-small paycheck, nobody is forced to make sacrifices like the servicemen that fought in Vietnam. In a gripping, chilling and thought-provoking new novel, a group of such heroes rapidly discover that the fruits of their labor mean nothing when stacked against the militia of Wall Street.

'Gold in the Coffins', by Dominic Certo and Dr. Len Harac, was inspired by many stories of those who lost their livelihoods and dreams when entrusting their life's work to the Wall Street machine.

A taut tale of greed, murder, and revenge as combat-weary Marines take on the crooks of Wall Street. Gold in the Coffins follows the story of a tight band of retired Marines who bonded during a bloody tour of duty in Vietnam, only to find themselves facing a darker enemy back home, the demons of Wall Street. Donnie DeAngelo survived Vietnam and the rough streets of his childhood by never giving up the fight, whether his enemy was the Viet Cong or the mob. Defying all odds, he launched a successful coffee and food business, and decided to take his company public, but a Wall Street power broker has other plans for his business: force him and his comrades into bankruptcy and loot the spoils. When Donnie threatens to blow the whistle, his best friend winds up dead-and it looks like Wall Street has drawn first blood. Donnie and members of his former platoon are betrayed by the system they once fought to defend, leading them to conclude that revenge is a dish best served bloody.

"We have all heard stories about those losing everything to the ferocity and self-interests of Wall Street, but this story bucks the trend to tell it from the perspective of a group of people that define honor, integrity and bravery. Ironically, these traits are the complete polar opposite of some on Wall Street," explains Certo, who served in Vietnam. "After giving their service and blood to their country, the veterans of course deserve better. Will Wall Street ever recognize that? Not in this story.

Continuing, "They end up getting destroyed by a system they worked so hard to defend; a microcosm of our entire nation. But, of course, their military training compels them to never give up. Greed and power is trumped by honor, courage and combat strategy – something that allows them to win big over Wall Street. Want to find out how it happens? Buy the book!"

Since its release, the novel has garnered a string of rave reviews.

USA Today bestselling author Cara Lockwood comments, "This is a book that unfolds like it was meant to be an action movie".

Beth Sarafraz, Managing Editor, NY BLUE NOW Magazine adds, "I was up all night racing to the very last page, and then I had to remind myself this was a work of fiction, but so thoroughly crafted...that I was sure this story...happened to someone out there, for real".

And as one Amazon reader who posted a 5 star review states:

Vietnam, Colombia, Wall Street & Jersey --- Great combination of geography and tough characters, creating a fast story, ending in triumph. I am hoping this was the first in a series of adventures for the hero and his pals. Left me wanting for more!

'Gold in the Coffins', from Harmita Press, is available now: http://amzn.to/1MRLgsG

Find the one minute trailer on youtube.com: https://www.youtube.com/watch?v=Nb7fjszhibg
Or visit: http://www.goldinthecoffins.com

About Dominic Certo, K.S.J
Dominic Certo, K.S.J.. bestselling author of The Valor of Francesco D'Amini, served with the 7th Marines in Vietnam and was decorated for valor. Certo went on to become the CEO and principal of a national food service company. He brought it public in 2006 and fought to endure the Wall Street crash of 2007.

About Len Harac, PhD
Len Harac, PhD, is the President of Harac Consulting and has a wide range of experience, including advising numerous CEO's and serving as the Public Affairs Director for The Essex County Chiefs of Police Association. Dr. Harac is a frequent participant in military-style tactical training programs. Gold in the Coffins is his first novel.

Both authors reside with their families in New Jersey. 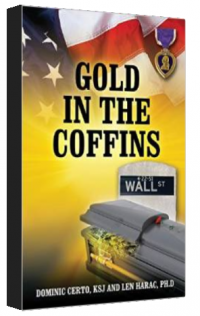