Guardians of the Crystals: Technology, Evolution & Humanity Collide, as Bold New Series Calls on Ancient Civilizations to Answer Challenges of the Future

Blurring the lines between science and fiction, K.D. Martel’s ‘Guardians of the Crystals: The Osirion Connection’ is volume one of a compelling new series inspired by the author’s passion for researching ancient civilizations. When a great flood destroys Atlantis and society finds itself recreated in a strange new land, they are approached by an ancient race of war-like humanoids to share their technology. All goes well until a rebel faction steals the new technology being developed as an energy source, leaving nothing but drastic measures on the table. Authentic and thoroughly-researched, it’s no wonder one critic has already hailed the volume an “epic battle between good and evil, technology and evolution”.

Shefford, QC -- (SBWIRE) -- 03/25/2015 -- While Science Fiction and Fantasy have long been staples of the literary landscape, both readers and critics are currently crying out for wholly-unique new narratives that don't succumb to recycling of the 'same-old' concepts. Thankfully, Canada's K.D. Martel is stepping up to the plate with gusto; melding both genres' cherished traditional foundations with driving elements that literally are ancient history.

It's all wrapped up into 'The Osirion Connection', volume one of the 'Guardians of the Crystals' series. This is alternative history as it was always meant to be told…

Fourteen years following the Great Flood that destroyed the continent of Atlantis, the survivors of that mighty civilization have recreated their flourishing society once again in the beautiful land of Mayach. Deanu, an Atlantean, is the Guardian of the Crystals, a name given to those Atlanteans who carry the genetic marker that allows them to create a symbiotic exchange with the Power Crystal entities. The Power Crystals are an ancient sentient energy source that originated from the Pleiadian star system, home to the ancestors of the Atlanteans that left their dying planet to colonize Earth over a thousand years ago. The Crystals power everything in the Atlantean civilization, from their normal every day electrical appliances, to their space faring ships.

The Atlanteans also share the Earth with the Osirion, a highly advanced, war-like race of humanoids from the Orion constellation. The two races are on amicable terms, keeping a distance from each other. The Osirion settled upon the Earth hundreds of thousands of years before the Atlanteans, yet their technology is not as sophisticated as the Atlanteans.

An Osirion, named Enkarath, a young engineer from the land of Kemet, visits the Atlanteans to enlist their aid in helping him create a new energy source for his civilization. With much hesitation from the Atlantean Elders, an agreement is reached for Deanu to help Enkarath establish a new power source for his people.

Unfortunately, the technology falls into the hands of a rebel Osirion faction from the red planet, Lahmu, who want to posses the Crystal technology for their own ends including war. Deanu and Enkarath are in a race against time to save their civilizations and the Earth from destruction. Enkarath discovers his true heritage and link to the Power Crystals and to the beautiful Atlantean woman that steals his heart....

"I have always had a huge passion for ancient civilizations and the technologies they have created," explains the author. "I can confidently conclude that, however advanced we think we have become, we haven't even scratched the surface of the accomplishments made by civilizations that no longer exist."

Continuing, "I wanted to write something that would compel people to think outside the box about our obsession with mechanical and technological advancements; to realize that we are not really that advanced at all. This new series takes a look at a society that did "make it", and presents its people in a very real and authentic light. While it's not hard science, the cocktail of action, adventure and genuine history will leave my audience with plenty to think about."

Readers agree, publishing a string of positive reviews. Andrea Klaus comments, "The epic battle between good and evil, technology and evolution. The story is realistic enough to make you wonder about our life and origins, as well as possibilities. You'll find yourself immersed in fantasy but on the other hand you wonder about how technology could change lives. The possibilities about different species, some good, some bad, some primitive, some evolved creates a full spectrum of vivid imagination. The author observes well the Earth's present circumstances and then gaze into it's past, playing with your mind as it's something from the future."

Diana Nichols adds, "This book makes you wonder and keeps you intrigued, on the edge of action, in the name of Good and saving Earth. A recommended read!"

'Guardians of the Crystals: The Osirion Connection' is available now: http://amzn.to/1LODNPR

About K.D. Martel
K.D. Martel was born in Halifax, Nova Scotia, Canada, but has lived all her life in the Eastern Townships of the beautiful French province of Québec.

Artist by nature, she has worked in several mediums over the past years and specializes in working glass and creating jewelry. She has published several online short stories and has written numerous short articles. Guardians of the Crystals is her first published work. She focuses her fiction based writing on the ancient civilizations that once inhabited the Earth since her passion has always been ancient pre-history! Getting the message across to her readers that there have been many highly advanced civilizations living in the past on Earth is what drives her to create her novels and their characters. 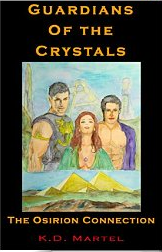