Irwin Sadetsky’s ‘Honorable Choices’ fuses a compelling love story with the perils of war, plundering societal standards and a true expose’ of the pressures modern educators and Principals face. However, cutting through the narrative’s confrontations is a bold reminder that honor, integrity and a true passion for teaching still exists and underwrites the entire education system. Humanizing the profession for those who base their opinions on the negative coverage of the news media, Sadetsky’s compelling novel presents, in very real situations, the truth about American schools today.

Port Saint Lucie, FL -- (SBWIRE) -- 03/26/2015 -- Nobody in the education system will deny it; principals and teachers are caught up in a toxic sea of politics that often takes priority over their innate obligation to inspire and empower the nation's children. Some teachers have reportedly turned to severe, drastic and even illegal measures to ensure that their test scores remain high. However, in a powerful and hugely-insightful new novel by Irwin Sadetsky, it becomes obvious that the profession still has honor and integrity as its core foundation.

Everything is wrapped up into 'Honorable Choices'; a fictional adventure that takes its cues from the author's own twenty-five years as a school Principal. It's a love story unlike anything written before, and one that exposes many shocking truths about what goes on behind school doors up and down the country.

The war in Afghanistan was easy compared to being the new principal of the George W. Bush Middle School in upstate New York. Matt Collins has on his plate his discovery that teachers are changing the answers of their student's standardized tests in order to increase the scores. The Superintendent of Schools seems to condone the practice. What choice does Matt have?

*His Assistant Principal wants to discredit him. What choice does Matt have?

*Matt has to disarm a student who enters the office with a loaded gun. What choice does he have?
*A combat hero in the U.S. Rangers he has to deal with his own PTSD.

*How to discipline two fourteen year old students found having oral sex? The girl being the President of the Board of Education's daughter and the boy being the son of the PTA President.

*Disciplining a teacher whose husband owns and edits the town's only newspaper. and handling the repercussions.

* Starting a loving relationship with a guidance counselor in his school.

*Stopping a school fire at the cost of his personal safety.

*Creating and establishing a Code of Conduct for student discipline after three other principals in nine years had failed.

*Managing teacher grievances formally filed against his administrative practices while trying to create an atmosphere of trust with the staff.

*Getting the community and the PTA to support the school's program.

This searing story integrates a modern romance story in real world situations. Beth Andrews, Guidance Counselor is attracted to Matt Collins, Principal. Their discovery of love for each other is fast, lustful and soulful. Beth helps Matt with his PTSD as she fight her own demons. Her mother has cancer, is in treatment, yet Beth suffers with severe anxiety.

Matt saves the life of a boy on the school field by giving him CPR before the EMT's arrive. He becomes a hero in this small town. He is confronted by a teenager in the school shooting a gun and Matt disables the student using combat techniques learned as a U.S. Ranger. His status is wonderful in town, but not with the Superintendent of Schools or the owner and editor of the town's only newspaper. The reason is that Matt has had to discipline the wife of the newspaper's owner who teaches in the school. The dynamic is set for confrontation all the time!

"All you have to do is pick up a newspaper or turn on the TV to come face-to-face with a wash of stories about low student test scores. Most people don't understand the pressure that is put on Principals and Administrators to keep these scores high, which has led some to cheat and change students' answers," explains the author, a prolific writer. "Central Administrators have had to mold themselves into politicians and are often forced to put their own jobs and survival before the success and welfare of students."

Continuing, "However, this book is on a mission to prove that good guys still exist; those with a passion for teaching who will never allow their integrity to waive. These people are committed to providing their students with the best education. They work to weed out teachers who cannot meet these standards. My protagonist exemplifies this perfectly, and it is vital he is put under the limelight for those who have become skeptical about the system as a whole. If you want to see the role of an educator humanized with gripping aplomb, then this is the book for you!"

About Irwin Sadetsky
Irwin Sadetsky was a school principal for twenty five years. He served as a Director at the Principal's Center at Long Island University mentoring new school administrators as well as an Adjunct Professor at Stony Brook University on Long Island, NY. Sadetsky has written "Iraqi Rebound" and "A Terrorist on Every Block" plus two non-fiction books used in graduate schools. He contributes his time and talents on social justice issues in south Florida. 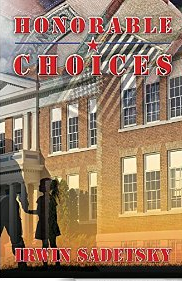