Crafted from the imagination and experiences of Sheryl Wright, ‘Contrary Warriors’ bucks all literary and societal trends to send a team of American First Nation women on a gripping military escapade usually reserved for their male counterparts. Born from the author’s own experience as a veteran and commercial pilot, ‘Contrary Warriors’ takes a modern, fun and wholly-unique modern spin on American OSS and Commonwealth SOE operations. The volume has already been hailed “fast-paced and heart stopping” by critics.

Toronto, ON -- (SBWIRE) -- 03/26/2015 -- While Sheryl Wright has clocked up thousands of flying hours behind the controls of commercial aircraft, she has remained disenfranchised by literature's preference to depict pilots as slick-cut, dashing men. When her flying career was abruptly halted in 1999 by botched surgery on her torn esophagus, the resulting battle for survival sparked a unique mission of its own – to write a book that portrays women aviators as the fearless, go-getting powerhouses they are in the real world.

A decade and a half later, 'Contrary Warriors' is finally hitting the shelves. Throwing the literary rule book out of the window, Wright's compelling story allows readers to explore loyalty as well as religious, cultural and national divisions from the 'safe' perspective of North American First Nation members. It's the kind of novel Wright wishes had been written years ago, and critics are loving it.

It's 2004 and the western world is desperate for real evidence of Iran's nuclear intentions. With the accuracy of intelligence gathering under deep scrutiny, both the CIA and MI6 are ordered to deliver indisputable evidence and call on their joint taskforce, the Special Operations Executive. Tori Braithwaite, the SOE Commander, balks at the preposterous plan the CIA has dropped in her lap, although sending a team to Iran as First Nations cultural ambassadors is tempting! First task, evaluate the psychological readiness of the proposed team leader, Cleo Deseronto, a retired RCAF pilot, but before she agrees to lead the SOE's band of Mohawk's, Braithwaite will put her to the test.

This modern spin on American OSS and Commonwealth SOE operations, sets three women warriors on a fateful collision course with an old-time CIA handler, the changing dynamics of today's cultural norms, and the politics of being women in the good old game called Intelligence! The guiding principles that distinguish the USA, the United Kingdom, and Canada, are thoughtfully inter-woven, introducing the First Nations, the question of loyalty, and issues such as Gays in the military. Warning: This fast paced romp through the secret world of western spy craft, comes with high-flying adventures, mysterious players, secret locations, and the rallying cry…"Leave no man, or woman, behind!"

"I've always been a huge fan of military and spy novels. After my botched surgery left me fighting for my life and in a period of recovery longer than I'd wish on my worst enemies, I had plenty of time to indulge in my reading. However, there were literally no novels that featured the kind of women I encountered daily during my military experience," explains Wright. "I wanted to tell their stories as well as those in First Nations communities that rarely get featured in novels from an international, specialized military perspective."

Continuing, "The narrative will help readers explore many contentious themes from a safe place that is less emotional than the nightly news. From ISIS to Iran's supposed nuclear power – the story I have woven together gives an inside view with no back-handed agenda. At the same time, it's a fun romp across the globe that will have readers dreaming up their own boundless adventures!"

As mentioned, pre-publication reviews have been overwhelmingly positive. San Francisco Book Review comments, "Contrary Warriors is a fun novel with plenty of action, interesting characters, and a fun premise. The use of Native American characters isn't forced or felt like it was added on for flavor, but an integrated part of the story and the characters. The focus on three women as main characters steps out of the usual male-dominated thrillers and provides a different perspective."

Penn Book Review adds, "More than just an exciting and entirely plausible suspense-thriller, Contrary Warriors is unique and deserves a space on any thriller enthusiast's bookshelf. An excellent addition to the political and military thrillers fictions. The book is a must read."

'Contrary Warriors', from Florida Academy Press, is due in April, 2015.

About Sheryl Wright
Sheryl Wright is an aboriginal Faith Keeper in the Longhouse tradition, and author of several non-fiction books. A native of Toronto, she studied aviation at the American Flyers Academy in Florida, also completing an Electrical Engineering degree at Gordon University. Her aviation experience includes Canadian Airlines, Ontario Express, Bearskin Airlines, and Her Majesty's Canadian Armed Forces, in which she served as both a member and an officer. 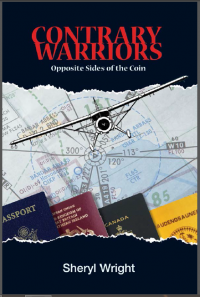