She Flew the Coop is the story of four women who decided to leave behind something secure to pursue their dreams. This women’s empowerment documentary is the upcoming venture from the producer duo of Sarah Batista & Kristen Johnson.

Charlotte, NC -- (SBWIRE) -- 03/27/2015 -- She Flew the Coop is an absorbing story of women empowerment where four women come out of their stable lives to travel abroad and pursue a dream. In fact, the film draws inspiration from the life of the film's director Sarah Batista who launched her own video/film production company leaving behind a decade-long, successful career in TV news reporting. It has always been a dream for Sarah to direct a documentary film, and her dream is about to come true.

Throughout this film, Sarah plans to document the fear and restlessness caused by her decision to downsize her life, sell her home and almost all her belongings. The films primary focus is to find out how much sacrifice is required to pursue a dream. In the search of this answer, the film delves deep into the fear and issues that keep women from chasing their dream.

Talking About this upcoming documentary, Sarah says, "I intend to put 150% into producing this film and inspiring women around the globe. My dream is for She Flew the Coop to become a movement, and possibly a travel series that will motivate women to step out, take risks, start something and go after their dream whether abroad or not. This film is for women who desire more out of life!"

Sarah & Kristen have just started a Kickstarter campaign to raise their minimum funding requirement of $25,000 for this project.

This campaign will end on April 14, and all funds raised will be spent on

To find out more about this campaign, please visit http://kck.st/1NbQ5gH

About She Flew the Coop
She Flew the Coop is the story of four women who decided to leave behind something secure to pursue their dreams. This women's empowerment documentary is the upcoming venture from the producer duo of Sarah Batista & Kristen Johnson. 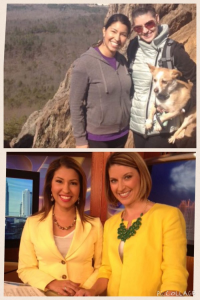