Romance, Choices & Fate Collide in Compelling New Series – Forcing Readers to Question if They Would Do the Same

Masterfully crafted by Audrey Burke-Moore ‘The Choice: Weighted Letters’ forms volume one of an expansive and powerful new ten-part series that compels readers to make some darn tough choices of their own. In this first installment, two intruiging stories unfold as three characters get face-to-face with love, each other and the never-ending battle between fate and chance.

Adamsville, AL -- (SBWIRE) -- 03/30/2015 -- While nobody will deny the unstoppable popularity of romantic fiction, many critics and readers are currently crying out for wholly-unique new narratives that don't succumb to recycling of the 'same-old' concepts. Thankfully, Alabama's Audrey Burke-Moore is stepping up to the plate with gusto.

Her 'The Choice' series is far from being cookie-cutter; throwing readers into two intertwining narratives and ultimately leaving them to figure out what they would do in the same situation. It's intricate, intense and guaranteed to be a welcomed break from current works flooding the market with stagnancy.

'Weighted Letters' is volume one, and it is a fierce battle between the forces of fate and chance.

Weighted Letters - The series revolves around two intriguing stories about the choices the characters, Austyn, Keith, and Cheryl, get to face. At the end, readers are left with the ultimate question: "What Would You Do?"

The Promise - Secrets hold a tight grip on the heart. After meeting as children, Cheryl and Keith developed a friendship worth dying for. Is it too late for the friendship to grow into more, or has Keith realized that Cheryl was his greatest desire, and just like an empty hour glass, he let his sand get away?

"This isn't passive reading, but instead an opportunity for every reader to become embroiled in the narrative and explore what they would have done in the characters' places," explains the author. "I'm sure that, if they were confronted with the choices seen in the book, they would be able to write a gripping saga of their own. I'm also actively urging all readers to get in touch and make suggestions on how I can complete my "to be continued…" story. See it as a unique author/reader collaboration project!"

Continuing, "Each volume will tackle a series of bold themes and the eccentricities associated with them. Everyone will find a piece of themselves in the series and likely come to realize some harsh truths about their life. If I can inspire or empower people at the same time, well, that's a bonus!"

With nine more volumes in the works and plenty more thought-provoking adventures waiting, interested readers are urged to get started on volume one without delay.

'The Choice: Weighted Letters', from AuthorHouse, is available now.

About Audrey Burke-Moore
Audrey Burke-Moore is the female literary genius behind the recently launched The Choice Series: Weighted Letters. Based now in Adamsville, Alabama, she's always had a love for writing.

Audrey fell in love with words at a young age, and often admired how words gave her the ability to express her innermost thoughts and feelings. Avid in poetry writing, she has always found ways to articulate words through building foundations based on real-life understandings. A wife and a mother of three, Audrey uses the world as her illustration to help create a visual thought of the written word. 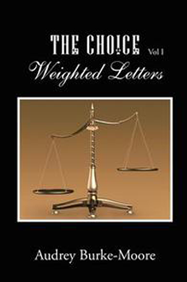